Burning down the house by Cathy Shouse 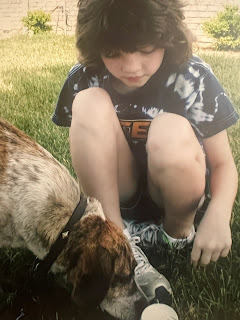 I’d been telling our son for years that he could have a puppy “some day.” One summer day when he was eight and our daughter was two, we were visiting my cousin. She had just adopted a puppy for her kids. Murphy was a Beagle mix, and there were other puppies in his litter that still needed homes, she told me.

Overcome by the cuteness overload of Murphy, I seriously considered checking out the rest of his litter. But when I told my dad, a dog lover, he was against the idea. We had a dog when I was growing up but we lived on a farm. Dad thought having a dog in town would be a mistake.

My husband and I went with the kids and picked out Lucky and brought him home anyway. It was one of the few times I had overruled my dad. My cousin and I and our four kids between us thought it was the coolest thing ever that our dogs were brothers. Our husbands were on board too. We would let the kids and puppies play in the yard together. She and I discussed endlessly whether our puppies greeted each other in any special way since they were related, just as we were all related.

One day as the weather was turning colder, Dad came to our house and dropped off a doggie electric blanket for Lucky. He lived outside in a kennel surrounded by a tall fence, in a doghouse shaped like an igloo. Dad also attached material to the opening of the dogloo to keep the wind out. I was so grateful for the help, especially since Dad had been opposed to our getting Lucky!

One morning I’d been up late with our daughter, woke up early, and peered out the back window at the dog kennel. Where the dogloo had set, there was a small pile of ashes. I was nearly hysterical, and glad the kids were still asleep. How could such a wonderful idea turn into such tragedy?  As my husband and I went out to look for our puppy among the ashes, I wondered how much therapy it would take for our kids to get over knowing their new, sweet puppy had burned to death in the backyard. :(

But we couldn’t find any remains. A couple of hours later, Lucky came trotting in from the field behind our house, unharmed. He must have chewed that heating blanket, which created a spark and started a fire. Our tiny dog had been so scared, he’d figured out how to scale the fence of his kennel.

I called Dad, a man of few words, and told him what had happened. He said, “Well, I wondered about that.”

To follow my adventures, and to check out my upcoming novel scheduled to release Oct. 4, 2022, Her Billionaire Cowboy’s Second Chance: A Galloway Sons Farm Novel (A Fair Creek Romance, Book 1), go to www.cathyshouse.com where you will receive a free novella for subscribing to my newsletter.

Email ThisBlogThis!Share to TwitterShare to FacebookShare to Pinterest
Labels: a Beagle mix, and his favorite girl, Lucky