Sparkling snow. Glistening icicles. Frigid temperatures. It’s January and winter. And it’s National Soup Month. What I like most about the winter season is the amazing soups you can make to eat hot and which keep you warm on chilly days. In most cases, they are healthy. Many have lower calories than other foods, and they fill you up.

I have so many favorites. My husband is the connoisseur of soup-making—all of them from scratch. My favorite one is his ham and potato soup, but his chicken and rice, with lots of  carrots added, is another winner. Our local supermarket here in Florida has a “soup counter,” where you can purchase at least six different already-made, piping hot selections. I dive right in and grab a small tub of the clam chowder served on Fridays. (Now this one may not fit the low-calorie chart.) 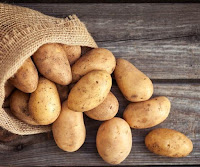 Growing up on a farm, we have all kinds of soups: beef noddle, red cabbage soup (Borscht), chicken noodle, vegetable, cream of potato, etc. They weren’t fancy like the present Campbell’s hearty, no-water-added varieties such as “Chicken and Sausage Gumbo” which I purchase every trip to the store. I hate to admit it, but anything with the word gumbo has me hooked.

What is your favorite winter soup? Do you like a broth or cream base to it?

Below is my recipe for potato soup. It takes a little longer to make, but it’s worth the effort! 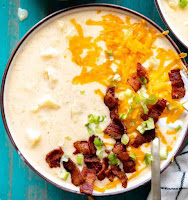 1 (one) lb. bacon, fried and chopped in small pieces—save ¼ cup bacon grease in pan for frying other vegetables. Save some chopped bacon for topping as well.

—russet, red, and others will also work

1 cup of heavy cream (I use whole milk)

Salt and Pepper to taste

*shredded cheese or bacon crumbles for topping, if desired

Fry bacon in a large frying pan until done and remove from pan. Chop into small pieces.. Drain off bacon grease, about 1/4 cup. Cook celery and onion in the reserved bacon drippings for five minutes until soft. (Here is where you can add minced garlic, if you want it.)

Add your cubed potatoes and toss to coat—sauté 3-5 minutes. Toss in bacon to pan and pour enough chicken stock to cover potatoes. Cover and simmer until tender.

Melt butter and whisk in flour, cooking and stirring over heat for a few minutes. Once rue is made, whisk in cream (or milk) and cook again, stirring until thickened. Stir cream/milk mixture into the potato mixture. Take about a half-cup of soup and puree it, returning it to the pan. Use more puree for a thicker soup.