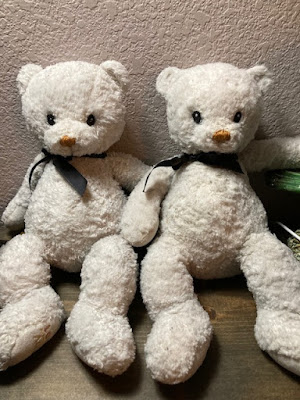 Long gone are the days of looking for forward to the event of Christmas. It seems like most of the joy left my home with my children. I love the season of giving and family and coming together, but that special magic that only happens at Christmas has been a bit elusive in the past years, to the point that the whole business of decorating and finding the right gift is exhausting. Don’t misunderstand, I am no Scrooge, but not exactly the bearer of Christmas joy either.

I have mentioned on my posts before that I sew and one of the things, I don’t do a lot of, but brings me a significant amount of joy, is making memory items from clothes of loved ones. I have made bears and fox and bags and even a cat. I don’t really have time to do these and don’t advertise, but occasionally someone will hear about me, and I rarely refuse. It is my introverted way of bringing comfort to the grieving family without commitment.

This year, my daughter saw a post on a social media Mom’s page, asking if anyone had experience in repairing memory bears. My daughter, only seeing the memory bear part, volunteered me. I am beyond blessed and sometimes frustrated that both she and her child seem to think Mama C can fix or make anything when it comes to sewing.

I got the woman’s information, and we chatted a bit. Her grown son was off to college and was struggling with being away in his new environment. The only thing he asked for this season was for his childhood bears, Bear and Other Bear to be repaired. 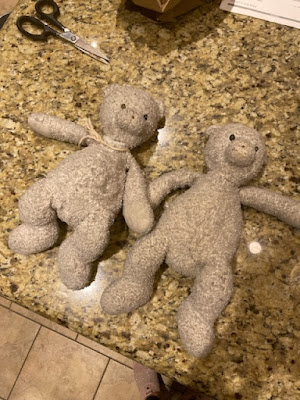 The woman delivered the bears and all I could do was bite my lip and think to myself, this would require a miracle. She handed me two small brown, near faceless bundles and explained to me how she held one of them while she was in labor with her now grown son and that he loved the bear so much; they had to find another one because it was wearing out. She asked how much I would charge, and I told her I wasn’t sure what I could do and that there would be no cost. 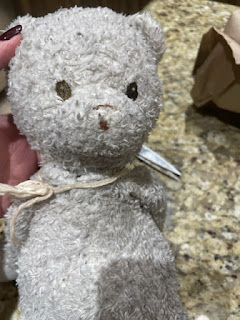 The first thing I did was look up the well-loved bears to see what the original state should look like and found, to my shock, that they were originally white. I picked up one of them and inspected it closer and wondered what I had gotten myself into and how much I could do to return them to their actual youth and doing what I always do when in doubt- I jumped in started working. 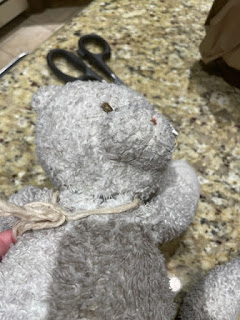 Next, I made a bath of warm soapy water with a little oxy clean and let them swim for a while. That didn’t do a lot, so I sprayed them with an oxygen based cleaner and a miracle began to occur. I rinsed them well and put them between a towel and squeezed out the water and let them dry.

I used a wire dog brush and gently brushed them out. They really had fur, after all, at least a little. I had to be careful, because they were pretty fragile. Then, I fattened them up with fluff and restitched the many holes and sewed their heads back on.

I used oil-based paint pens to paint the eyes and even added that special white dot for the gleam. It was the nose that did it, though, that brought the bears to life and gave them back their personality.

As a side note, I sent a photo to my daughter as I was repairing them, and she asked if I had changed out the fabric on them. 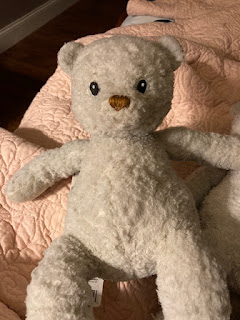 The last time I saw them, they were neatly tucked in a box awaiting pickup, so I didn’t get to see them off. I thought nothing more about them until Christmas eve when I got the best gift ever: an emotion video of the young man opening his Bear and Other Bear and the sweet and sentimental reaction of love at the realization they were his beloved bears.

There is no price you can put on a gift like this, to bring someone joy over things thought lost or returning a childhood memory.

I have watched the video several times and reflected on all the things learned:

It is never too late to reinvent yourself.

Someone loves you and thinks you are special, regardless of your external looks.

We should all be lucky enough to show the wear and tear of constant love.

Sometimes, someone believing in you is all it takes for a miracle to occur.

As writers, we have the ability to provide joy in every story through the recreation of memories and by providing much needed escape in this sometimes-crazy world. 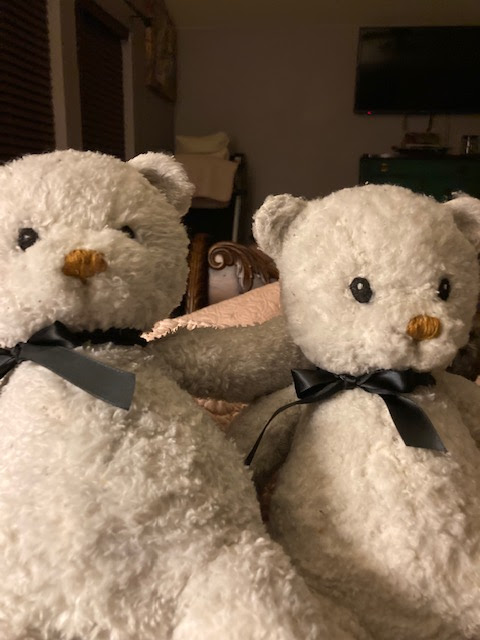