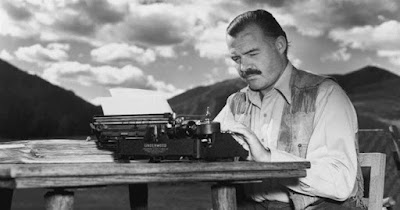 In my May article, I talked about my obsession with my tailless cat, Bobbin the Manx. I indicated I was thinking about finding him and my tuxedo kitty, Button, a playmate. In my search, I came across what is known as a "polydactyl Manx" or a tailless cat with extra toes.

So, count your kitty's toes. If he is like most cats, he as five toes on each front paw and four on each rear for a total of 18. If you kitty is polydactyl, however, he might as as many as eight toes on any of his paws. The word is Greek in origin with "poly" meaning "many" and "daktylos" meaning "digits". 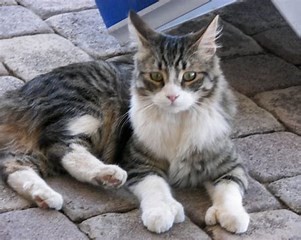 According to the Guinness Book of Records, Jake, a ginger tabby from Canada holds the record with seven toes on each paw for a grand total of 28.

Most Polydactyl cats have extra toes on their front paws that can resemble a thumb. It seems to make them look like he is wear mittens, thus some people call them "mitten cats". These extra digits are not opposable, meaning that toe can't touch the rest of his digits like we can with our thumb. 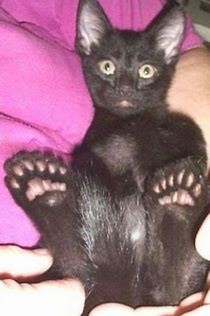 The polydactyl trait can occur in any cat breed, although is common in Maine Coons. At one time, 40% of all Maine Coon had these doublewide paws with extra digits which functioned as natural snowshoes- useful in the state of Maine.  While the numbers have declined, Maine Coon polydactyls are still recognized as an official breed by many cat fanciers.

As cat tales go, it is rumored that polydactyl cats were popular on ships because they were excellent mouse hunters and those extra toes helped them with balance on the rocky seas. This could explain their widespread presence today, predominantly in the United States, Canada, England and Wales.

In 1930, Stanley Dexter, a ship’s captain believed these multi-toed cats were good luck and gave a cat, Snow White, to writer Ernest Hemmingway. History is a little bit fuzzy on this and some articles say the cats name was Snowball.

Because of Hemmingway love for these cats, they are often known as “Hemmingway Cats.”

Today, there are forty or fifty polydactyl cats living at the Hemingway House despite the writer’s passing in 1961. Some of the cats are descendants of Snow White and all were born onsite.

The Hemingway House and Museum website notes that Hemingway named all of his cats after famous people, a tradition the curators continue today. Over the years, cats have been named after everyone from Zane Grey and Marilyn Monroe to president “Hairy” Truman, Fats Waller, Kermit “Shine” Forbes, Truman Capote, Bugsy Siegel, Billie Holiday, and Cary Grant.

The Hemmingway House is open to the public as a museum in Key West,
https://www.hemingwayhome.com/cats/ 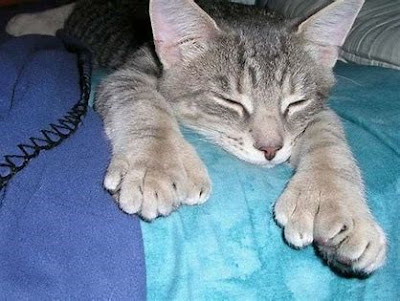