July: A Busy and Fun Month! by @JacquieRogers #silvercity #oldwest

July: Comes In With a Bang
Goes Out With a Roar
by Jacquie Rogers
Let's face it--there's absolutely nothing quiet about July!  We start off with fireworks (in the USA) and then there's something going on nearly every day.
First, there's Idaho's birthday, which is July 3, 1890.  The story goes that Mr. Dubois, later Sen. Dubois, wanted Idaho's birthday to be July 4, but then it was pointed out that stars are added to the flag only on July 4, so if they waited one day, then the star wouldn't go on the flag until 1891.  Well, that certainly wouldn't do!  Hence, our state's birthday is July 3rd.
State Seal of Idaho: the only state seal designed by a woman, Emma Edwards Green.
Our town's fireworks are on the 3rd of July instead of the 4th; however, we're not going this year.  With COVID-19 on the rampage around the country there's no reason to mingle with a bazillion people who aren't wearing masks.  So we're staying home, although we might go to our friends' house and watch the 4th of July fireworks from their porch.
But maybe not, because I have 20,000 words to write in five days.  Should do it in four days but I don't think that's going to happen.  What's this book?  It's my contribution to The Golden Legacy series.  My book comes out July 17th.  See why this is making me nervous?  Truth be told, I've been having a really tough time getting up the motivation to write since the move, but a tight deadline will do the trick every time. 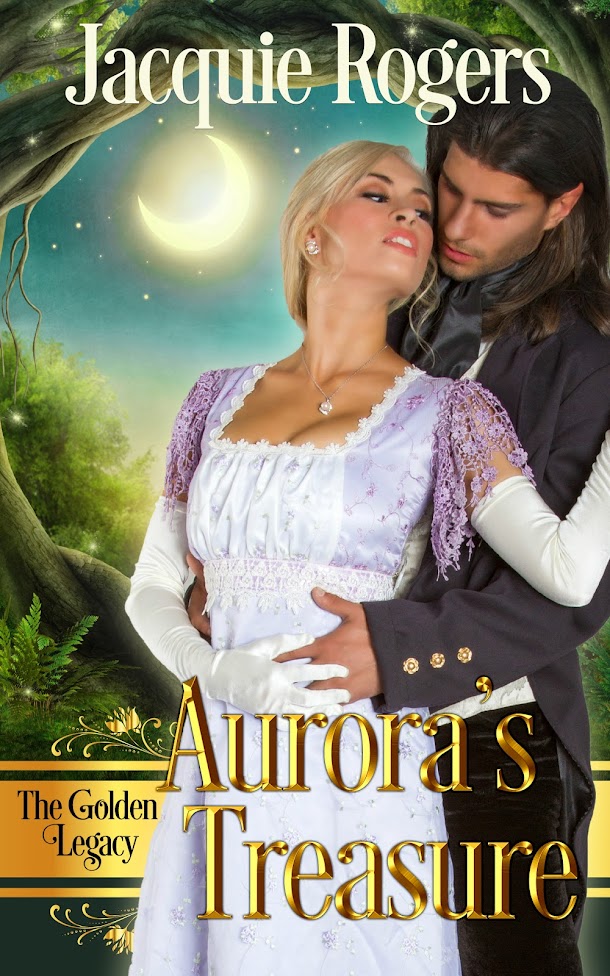 I really love the cover although I'm not too keen on a Regency dress in 1885.  I'm just hoping no one notices.  The cover designer did give the hero pointed ears, which is cool because he's a faery of the Yellow Clan, Guardian of the Portal.  Stay tune for a blurb--I'll be posting it on my Facebook page, and also my newsletter, the Pickle Barrel Gazette.
What else is happening on July 17th?  Yes, it's...
Jacquie Rogers's Readers' Event
Much Ado About Silver City
Huzzah!  We do have a wagonload of fun there and I wish everyone could experience it.  Of course, after I get Aurora's Treasure written, I have to write the melodrama that we perform.  "Perform" might be stretching the truth a bit, but what do you expect of the World's Worst Melodrama?  The worse it is, the better everyone likes it, and trust me, we have a blast. 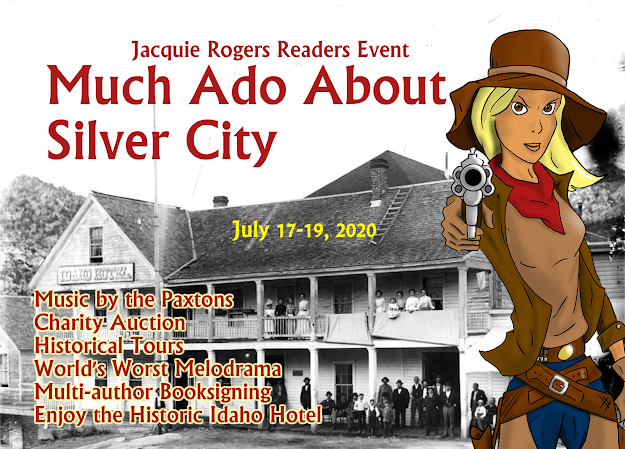 Then at the end of the month is my birthday and of course we're hosting the family reunion, so I have to make all those plans.  Did I mention that I have twelve 4'x4' raised beds and 10 Growboxes that I have to water and tend every day?  Did I mention that I'll also be in the throes of canning/freezing all those fruits and vegetables?
I think I'll faint.  So I better quit playing on the blog and get to writing.  Meantime...
Happy Reading!
Jacquie's Website | Amazon author page | BookBub
Facebook | Instagram | Twitter | Goodreads | Pinterest
Pickle Barrel Bar and Books on Facebook
If you're on Snapchat, friend me!  My handle is jacquierogers.  You can get videos of Sassy's latest updates there.  And goofy pictures of her scribe.
Keep up with Jacquie Rogers' latest news at the
Pickle Barrel Gazette!
Honey Beaulieu - Man Hunter series

Posted by Jacquie Rogers at 2:24 AM