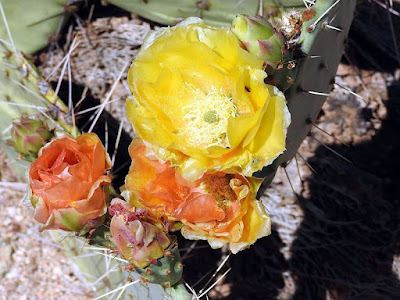 What draws someone to a place? Why do some places touch our souls and others leave us eager to leave? There might be an explanation, but I don't have one. Just that several areas have touched me with the love that never changes.

The Columbia River Gorge was one of the first as I grew up at its mouth. Arizona came next. I first saw it when I was married and my husband and I drove down there for him to attend graduate school. Oregon and our farm with the creek wandering through it was next. And then came Montana. I've loved them all and still do but one is where I am likely to live out my days-- Arizona.

There are many diverse areas within the state, from tall forests and deep canyons to deserts with their rare waterholes. My home sets in The Sonoran Desert, which stretches from Mexico in the south to the Mogollon Rim to the north. I am from here within easy reach though of those mountains as well as Mt. Lemmon which reaches above Tucson and at 9,159 feet even can provide some winter skiing. A drive up there is like passing through many climate zones to reach what would typically be in Canada.

When I first came to Tucson, being young and having friends also here for graduate school (Diane and her husband), we had a lot of fun, explored washes, and even took an Easter break in the White Mountains where we rented a cabin (which we shared with our cat, Sheba). Arizona was where I got pregnant with what was to be our daughter. That made me eager to return back to Oregon for her to be born.

It wasn't long though that we began to plan vacations back to Arizona. We bought a small travel trailer and the four of us went on many trips back down, sometimes with a tent, sometimes with motels, but it was the destination and usually Tucson the goal after exploring other areas. 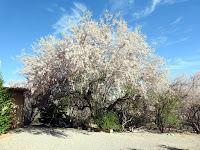 The first book I based in Arizona was written long before we bought Casa Espiritu in 1999. Desert Inferno is a contemporary romance between a border patrolman and an artist. It mostly happened around and out of Nogales with a brief trip north to Sedona and Scottsdale. I based it on my desert experiences and research regarding the Border Patrol at that time. It was full of the desert.  The trails the couple walked all were where I had been-- minus the danger they faced, of course. :) 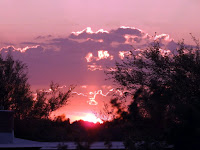 Arizona is also where I set 8 books in an historical romance series beginning with 1883 and the last one (for now) happening in 1905. Mostly, they were set in Southern Arizona. They follow two families, with some characters in the whole series as secondary after being heroes or vice versa. It's fun to write that way and find who the next romance will be along with the historic events at that time. Arizona is full of rich historical stories. It's possible, when I get to writing fiction again, that there will be a ninth. It's been rolling around in my head for a few years but just hasn't been the right time.


We were driving through the historical neighborhood of Barrio Viejo when I saw the potential for another series. It would be contemporary with a mystical, magical element of fantasy. Set in the real world, there would be powers and enemies to combat-- often not of the flesh. It has had a hard time finding readers because I've had a hard time finding a niche to set it in. It's romance for sure but not quite what some want in paranormals. Anyway, I had great fun writing that series giving people mystical powers to deal with 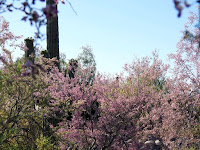 So this house has been inspiring to me spiritually and for my work as many books have been written here (many in Oregon too, of course) and some in our travel trailer while we explored new areas.

Why Arizona for me? No answer but it has spoken to my heart and I always love my time here.

All photos are May at Casa Espiritu, the name we gave our desert home when we bought it.


Set in Arizona--  Historicals are in Kobo, B&N, etc; but all contemporary romances are exclusive to Amazon and in Kindle Unlimited for borrowing: