A Trip to the Farmer's Market by Bea Tifton

I love fall. I love the crisp, cooler air, the pumpkins everywhere. We don’t have dramatic fall leaf foliage in North Texas, but the leaves do change.

When I was a little girl, my mother would go to the Farmer’s Market occasionally. Each fall, just by the pumpkin patch, there was a “Magic Pumpkin.” The children couldn’t see the string by which the small pumpkin was suspended, and it seemed to dance by itself. A quick child could actually catch it. I was small for my age and my older sister was tall for hers. One visit she said contemptuously, as only older sisters can, “You’ll never catch that. You’re just a squirt.” I felt the embarrassment and sadness as two children standing nearby snickered. I still stretched up my little arms, and the magic pumpkin just settled right into my waiting hands. The other children gasped. Bless the kindly adult on the other end of that string. 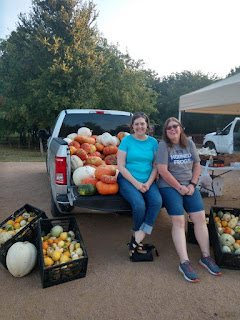 A week ago I decided to usher in fall with a trip to a local farmer’s market. I talked one of my best friends and her husband into meeting me early on a Saturday morning. Our first stop was this magnificent pickup just filled with brightly colored pumpkins in all the colors of fall. I bought a few baby squash, a cantaloupe, and the best cherry tomatoes I’ve ever eaten. Later that day I ate most of the tomatoes just like candy.
Most vendors are more than happy to talk about their wares. We met a man who was selling olive oil and olives from a family olive farm in Italy that goes back generations. He showed us family pictures and told us stories about going back and forth throughout the growing season. One man is an urban beekeeper with rows of amber colored honey jars for sale. Another older farmer had delicious gluten free pumpkin, zucchini, and banana breads. His granddaughter is gluten intolerant so his wife learned how to make them.

We wandered around the market for most of the morning. There was a small town feel in the midst of the big city. People with dogs strolled about happily and we had to pet each one. Children were running around freely. For just a moment, we forgot genetically modified food, heavy traffic, fighting for parking spaces wherever we drove. The world outside just melted away.
Have you ever been to a farmer’s market? If not, put it on your bucket list. If so, go back soon. 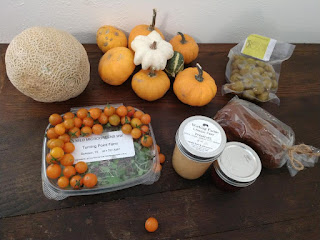