Sometimes the Rabbit Hole Pays Off!
by Jacquie Rogers 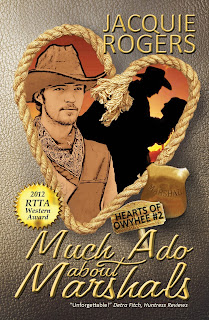 Every once in a while, research tosses me a gem and there's no way I can pass it up.  So it was with Dr. Liebig's Lost Manhood Restorer.  When I saw the ad in an 1885 newspaper, I knew it absolutely had to go into the next scene.

The scene I'd just written in Much Ado About Marshals (Hearts of Owyhee #2) had the town gossip all huffy because she didn't think taxpayers' money should go to the new town marshal.

“And while we’re speaking, I’d like to voice my protestations of hiring a wounded marshal. Half a man, he is, not being able to walk and all. I certainly do not approve of city monies going toward paying a man who isn’t capable of satisfactorily performing his duties.”

The new marshal was, indeed, wounded, and the heroine--who'd vowed to marry him--took it upon herself to heal him as quickly as possible.

To back up a little, the book is about Daisy, who wants to be a lady detective, but she's stuck in Oreana, a dinky town in Owyhee County, Idaho Territory.  Worse, her parents are insisting she marry.  What to do?  Ever enterprising, she cooks up a plan to build a new jail (the town did) and hire a new marshal.  Then she plans to marry him.

But the new marshal arrives wounded, and what she doesn't know is he's not the man she hired at all--this man is wanted for robbing the bank in Silver City.  What's more, her sister was working in that bank and she's the one who shot him!  But he goes along with it, mostly because he's wounded and can't get away.
Now to get back to Daisy's dilemma.  Here's the scene.  She needs the drool-worthy new marshal to get back on his feet in a hurry, and while she's stocking shelves in her father's store, she sees a bottle of Dr. Liebig's Lost Manhood Restorer.

“Sarah, I think we have our answer! Listen to this. “Nervous Debility, Impotency, Seminal Losses, Physical Weakness, Failing Memory, Weak Eyes, Stunted Development, Impediments to Marriage, etc. from excesses or youthful follies, or any cause, speedily, safely and privately cured.”

“He doesn’t look too nervous.”

“No, but maybe he doesn’t show it.” Daisy concentrated on the next word, trying to decipher its meaning. “Do you suppose Impotency means general weakness? After all if a medicine is potent, that means it’s strong. So impotency would mean that a man has lost his strength.”

Sarah nodded. “Must be. And he can’t be all that strong with a hole in his leg.” She picked up another bottle, unwrapped it, and studied the label. “Why on earth do you need a cure for not wanting to be a preacher?”

“Well,” Sarah explained, “it says Seminal Losses. I guess that must refer to men who have quit seminary school.”

Daisy shrugged. She didn’t know, either, so she studied the label again. “This medicine sounds like just the thing to speed his recovery, especially if it removes any Impediments to Marriage—although I don’t know how on earth it could do that. Mama says love potions are hoaxes.”

“It might help.” Daisy stuffed a bottle in her apron pocket.

“How are you planning to pay for it? Aren’t you going to tell your Dad?”

Daisy shook her head. “He won’t mind. I’ll just record it in the account book.” Where, she didn’t know — maybe on Mrs. Courtney’s account, but she wasn’t about to let her father in on her plans to marry the marshal until she had the marshal bagged good and proper.

I couldn't copy the entire advertisement because the original was longer than letter-size, and the copier would only copy that much.

So sometimes falling down the rabbit hole of research pays off later in the book or even later in the series.  You just never know when a tidbit might be just the ticket to a fun new scene.

Happy reading!  I hope you enjoy Cole, Daisy, and all the others in the Hearts of Owyhee books.

Posted by Jacquie Rogers at 6:29 PM