Is it Really August! by Paty Jager

The television commercials are talking about back to school.
My hubby is talking about hunting season.
I'm still trying to figure out where June and July went! 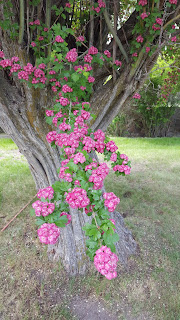 I made huge goals for myself this year in writing. It meant cranking out 2-3,000 words a day to stay on track. I'm part of a goal reporters group who report each Sunday night how many words we wrote for the week and the person who put the group together sends out a spread sheet showing where we are at for our projected goals. It is August and I'm at 45%. UGH! And I have 2 1/2, would prefer 3 1/2, books to finish by the end of the year.

And I started fair season the middle of July which means a trip a week to a county fair to judge for five weeks. I love judging and I love seeing the different fairs. But it cuts into writing, though this year I've been dictating as I drive. That has helped! In fact, I will have to say, I would be much farther behind if I hadn't bought Dragon and a small recorder. I wrote the third of one book by dictation, and the current WIP will be half written with dictation. It's the only way I can get it done being on the road so much.

One of my critique partners said the book coming out the end of this month flowed well, which made me happy considering so much of it was dictated then I had to decipher the dictation. They say the  more you use Dragon the better it learns your speech and you have fewer sentences to figure out. I really hope so! That would shorten the time it takes to fix what I dictated. LOL
The summer may not have passed so fast if I hadn't had an event both months. I started June attending the Wild Deadwood Reads in Deadwood, SD. My niece and I made some side trips that were fun and I met some more authors and readers at the event. Not to mention found myself signed up to sit at the Western Sports Foundation booth at a PBR event in Nampa, ID to sell the Wild Deadwood Tales Anthology in  October.
July I scaled the crooked, bumpy road to Silver City, Idaho for Jacquie Roger's Much Ado About Silver City. It was a small but fun event with live music, a melodrama that my granddaughter was delighted to watch twice.

This month, I'm finishing up judging at the Oregon State Fair, visiting nieces who will be home from Spain for a few weeks, and attending the Sumpter Flea Market over Labor Day weekend.

In between all of this I need to get 2-3k words written a day. I'll let you know in December if I made my goal!

How has your summer gone? Fast, slow, or just right?

Paty Jager is an award-winning author of 32 novels, 8 novellas, and numerous anthologies of murder mystery and western romance. All her work has Western or Native American elements in them along with hints of humor and engaging characters.