Happy Anniversary to Me and my Hubby! by Paty Jager 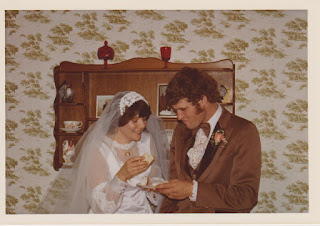 Today is my-our anniversary. My hubby and I tied the knot on this day, a Saturday, 39 years ago.  It's hard to believe we've been together that long! It seems like yesterday when we met at an Under 21 Club.

I was 19 at the time and a friend, younger than me, insisted I had to go with her to the club. We went and I had pimply faced 15 and 16 year-olds asking me to dance. I was 19 had a year of college under my belt, and scanned everyone who came through the door.

There he was! A tall, broad-shoulder young man who shaved and had curly hair walked in the door. I have never been one to walk up to anyone and start a conversation, but that night, I did. I asked him to dance. We did and he followed me back to the table where my friend and I were sitting. He said, he was supposed to come with friends and they all bailed on him at the last minute. We talked and discovered we a quite a bit in common. Though I didn't like his name. He said he was Albert and it didn't fit. I asked what his middle name was and he said Albert. His first name was Gerrit. I said I liked that better and that's what I have called him ever since and he has started going by his first name.

Backstory here: His parents came to the U.S. from The Netherlands in the 50's. They lived in a Dutch community until moving to Oregon. My hubby grew up speaking only Dutch until he was enrolled in school, at which time the teachers put on his report card for 2 years, please speak English at home.

Back to the name- when his mother enrolled him in school and when she said "Gerrit" they thought it sounded like carrot. He didn't want to be called carrot so they used his middle name Albert which sounded close to the same. And we now know if someone calls and asks for Albert they are someone who went to school with him because after he met me he goes by his first name.

I became side-tracked again! Anyway, he offered to take me home. We walked out to the parking lot and he
had a flat black 1957 International. We had to both get in the passenger door because the driver's side didn't unlock from the outside. There was blue angel hair hanging from the roof and the outside was covered in cow manure. He worked at a feed lot when he wasn't driving a semi.

We went back to the duplex I shared with a friend. She wasn't home and he came in to "talk" some more. He became handsy and I told him to leave.  He left.  I didn't have a phone number and didn't know how to contact him. I figured after throwing him out, I'd never see him. Three nights later there was a knock on the door. It was Gerrit. He asked if I wanted to go to a movie. He told me if I hadn't of been a good girl, which he considered wife material, he wouldn't have come back. He'd liked a lot about me, but wouldn't have wanted someone loose for a wife.

It wasn't long before we were talking long term commitment. But his mother told him he couldn't marry until he was 21. He turned that in April and we married in May. He is a momma's boy!

Three children and now 10 grandchildren we are pretty happy with our union and having fun as we play in the alfalfa and take short trips to places we've always wanted to see.


Because it's my anniversary- I feel like giving something away!  How about one of my books? Comment about how you met your significant other, or a date gone right and your name will go in the drawing for your pick of my books.

Don't forget the Wild Deadwood Tales Anthology is now available and all proceeds go to the Western Sports Foundation. 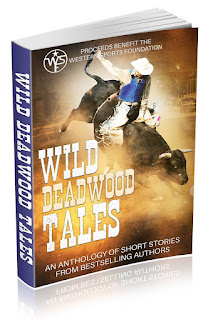 Paty Jager is an award-winning author of 32 novels, 6 novellas, and numerous anthologies of murder mystery and western romance. All her work has Western or Native American elements in them along with hints of humor and engaging characters.This is what readers have to say about the Silver Dollar Saloon series: “Paty Jager brings her characters to life, right off the pages of her book. You will laugh, cry, be sad and get angry right along with the characters.”

You can find me at these places. Paty's Posse is my western romance newsletter.