See You in September

“See you in September. See you when the summer’s through.”

Can you name that song?

Of course, “See You in September,” which was originally sang by the group, The Tempos in 1959. It became much more popular when it was later released in 1966 by the group The Happenings. Since then, it has been released by various other groups like The Pacemakers.

It’s one of my favorite songs since Labor Day and September signal the end of summer and the beginning of autumn. The clever landscape artists will arrive in Pennsylvania in four weeks and will paint our hillsides in colors of gold, scarlet, and tangerine. Autumn brings cooler misty nights, foggy mornings, and warm sunny days. 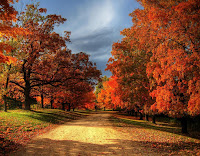 It’s sweat shirt weather and the sound of crackling leaves and the bubbling laughter of children as they gather at the bus stop. It’s the smell of wood smoke in fireplaces and outdoor fire rings. It’s also the most wonderful time to play a game of golf in moderate, cool temperatures. The downside? Trying to find your golf ball among the early falling leaves.

September also reminds us that we need to finish all those fair weather chores before winter creeps up on us. The mild weather lets us reassess what we hoped to accomplish and determine what we really need to get done.

For me, September is a new beginning and a chance to evaluate the writing projects I want to complete before the holidays come galloping into my life to distract me. I love September in Pennsylvania.

Enjoy the fall.  And I’ll see you in October—right here on this blog!


I have edited and released a second edition of “Up on the Roof and Other Stories” with a bonus short story included. It’s a collection of nineteen eclectic—humorous and serious—short stories exploring the lives and relationships of the young and old.  You will laugh, you will cry, but you will be able to relate to the dilemmas of the life.

A grizzled old farmer, Pop, climbs up on his farmhouse roof to meditate, check his chimney and antenna, and ends up talking to God on his portable phone in “Up on the Roof.”

In “Bald Revelations,” Maureen is convinced her husband of twenty years is planning to leave her when he purchases ten new pairs of black socks and starts singing Beach Boy songs