There comes a time in everyone's career or life where they feel the need for a change. I believe it also happens to writers. I know in years past I've jumped around writing different genres and have finally settled on historical and contemporary western romance and murder mystery.

I'm comfortable writing western romance, whether historical or contemporary. I hadn't written a contemporary in a few years and when asked to write a novella for a box set, I was excited to pick up an idea I had written down several years ago and now, I'm writing a contemporary western series - Tumbling Creek Ranch. I love the idea of a working dude ranch with so many possibilities of love connections. And I like the families I've connected to the ranch. You'll find the first book of this series coming out in a box set tilted Cowboy Dreamin'. 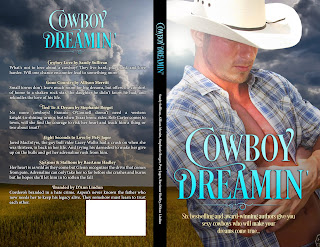 Here's the blurb for my book:
Eight Seconds to Love
A Tumbling Creek Ranch Novella

Lacey Wallis has put blood, sweat, and tears into her dream of making it to the National Finals Rodeo and isn’t about to let an injury stop her. However, she didn’t expect the ER nurse to be the man she had a crush on years ago, or to discover that crush hadn’t been one-sided.

Jared McIntyre lived through loving and the death of one thrill-seeking woman, and wasn’t about to let that happen again. Especially not to Lacey. But that would mean he’d have to allow himself to love again.
Which will it be, a life-long dream, or the love of a lifetime?

I've also started a new historical western series, Silver Dollar Saloon. This is a series about the women of the Silver Dollar Saloon and the men who own the saloon. It has been a fun project, populating the town and coming up with characters. The first book took me longer to get the heroine's dialog right. I was making the southern belle a bit to "Redneck" according to two of my critique partners. I hope readers now find her more refined but with enough twang in her talk to remind the reader she is from Jawja (Georgia).

Here is the blurb for the first book in this new series:
Savannah
Silver Dollar Saloon

Escaping a past full of deceit and larceny, Savannah Gentry goes in search of her only kin, a half-brother she discovered after her father’s death. She hopes Shady Gulch in the Dakota Territory can give her a future. There she stumbles into the arms of Reverend Larkin Webster, finds herself working in the Silver Dollar Saloon, and soon fears she’s gone from the frying pan into the fire.