Potholes in the Writing World by Paty Jager

I don't think there's a person in the world who hasn't driven a car or rode a bike and had the jarring experience of a tire dropping into a pothole in the road.

The same goes for writers. I don't think there's a writer out there who hasn't hit a pothole with a story or character at some point in their writing career.

I don't believe in writer's block. If one story isn't working, I move on to the next in my ever-growing file of ideas, or go for a walk, or ride my horse. Eventually, I realize what is wrong with the story and go back to it. I've never been at a point where I couldn't write a thing. But I've had times when a story needs readjusting.

The month of June was a non-writing month for me. I did promotion and kept up the business side, 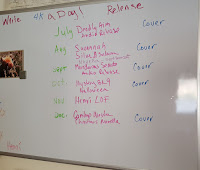 but I had too many commitments and family to sit down and write every day. Because of the non-writing month, this month was to be a marathon of writing to get projects finished. Except, I took on a project not on my white board. Which meant I had to write even more.

Because I added a project that needs to be completed by August, I decided to write two books at once. Work on one in the morning and one in the afternoon. No problem. It was working well, until I decided, if I worked on the one only, I would have it done in no time. So I switched to the one book, but then I discovered the information I had taken at face value as being correct, wasn't. I began to contact people who would have the answers. And their replies had me scurrying to take out a subplot in the story and rewrite half of the book. Whew! That is done, now I'm back to writing on the one project and heading full steam ahead.

This year has been a year of backing up and rewriting projects. I don't know if it's because I jump into stories too quickly because I'm so excited to write the characters' stories or if it is because I haven't been doing all of my research before I start a project. I've found lately I do some, but most of the research is done as I write and that is what causes the need to do rewrites and restructure. That is not a constructive way to get projects out in a timely fashion!

The project I'm working on now is a novella that will go in a box set. It has a woman bull rider and a male ER nurse. Do you see the conflict? ;) This has been a fun book to write because the chemistry is so hot between them, but they have her thrill seeker nature warring with his need to protect.  It's titled Eight Seconds to Love and will be out in September.

Here is the tentative blurb:


Jared McIntyre can’t believe his eyes. The bull rider brought into his ER is none other than his best friend’s tomboy cousin, Lacey Wallis. The girl he couldn’t get out of his head the last fifteen years. During his tour in Iraq he lost another thrill-seeking woman and he isn’t about to let this one destroy her life.

Lacey Wallis is injured during the bull ride that moves her up in the rankings to go to National Finals Rodeo.  Her dream. But the guy she had a crush on when she was thirteen is back in her life, and trying his darnedest to make her give up on the bulls and get her adrenaline rush from him.

Paty Jager is an award-winning author of 32+ novels, a dozen novellas, and a passel of short stories of murder mystery, western romance, and action adventure. All her work has Western or Native American elements in them along with hints of humor and engaging characters.

© Can Stock Photo / Stocksolutions
Period Images
Posted by Paty Jager at 12:01 AM