I had two releases the end of May. I didn't plan that very well. :p But I never discourage a release. I love having stories I enjoyed writing get into the hands of readers who like my characters.

The first release is a  contemporary western romance novella. Catch the Rain is an idea that has been in my western romance idea folder for some time. I came up with the title before the story fully came to me. I was swathing hay(for those who don't know the terminology, I was cutting hay with a large piece of equipment) and listening to music on my MP3 player. A line in a song stuck with me. It was, "like trying to catch the rain." That's what I wrote down for a title, which was shortened to Catch the Rain. Then I worked at discovering something I could use that concept on and found it. I gave my heroine a disability. Little did I know that later before I even wrote the story, I would have a granddaughter with the same disability.

Here is the blurb for Catch the Rain


Running from her past, Kitty Baxter catches a glimpse of her future—if she’s brave enough to believe in herself and the kind-hearted stranger who claims she deserves love.

Focused on setting up his new veterinarian practice, Zach MacDonald becomes sidetracked by a karaoke singing beauty with a secret. He sees what others don’t, and becomes determined to make Kitty see that anyone can learn to catch the rain.

This can be found in the Cowboy Six Pack Box Set 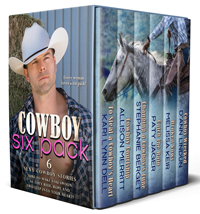 Every woman loves a six-pack! Six sexy cowboy stories sure to make you swoon as they ride, rope, and two-step into your heart!

Pick it up at Amazon for $0.99 or Free in KU
To Steal a Cowboy’s Heart by Kari Lynn Dell: Rule #1: when undercover, never get personal. He’s the exception she can’t afford…or resist. If lying is your job, is true love possible?

Cowboy Courtship by Allison Merritt: Despite work-place trauma and domestic drama, Dean and London might be able to overcome any relationship trouble with a little patience and a sweet cowboy courtship.

Changing a Cowboy's Tune by Stephanie Berget: After years apart, can the barrel racer and her cowboy see past their own dreams and cultivate a life they both love?

Catch the Rain by Paty Jager: Zach MacDonald, the new veterinarian in town, sees in stable hand, Kitty Baxter, more than she sees in herself.

Broken Vows by Melissa Keir: Distance causes problems for Rick and Julie. It turns their world upside down. When Julie puts her foot down, will Rick make the right choice or will their vows break?

Cowboy Wrecked by D’Ann Lindun: Can a schoolteacher who wants nothing more than a family of her own and a bull rider unable to father children find a way to build a life together.

My second release is Fatal Fall, book 8 in the Shandra Higheagle Mystery Series.
This story had been brewing in my mind a while, and when I started writing, things fell into place. I had my suspect chart, my victim, the motives, and I thought the killer. As the story progressed and evidence was revealed both by the police and to Shandra in her dreams, it was apparent I may not have picked the correct murderer from the start. As I wrote a scene toward the end of the book, I realized who the murderer really was and wondered at whether or not it would work. I chatted with my  niece who has read all the books and is putting together my series bible and she agreed I had made a good choice. Then she said after she'd read the book that she was surprised by the killer even though she knew who it would be. Yes! I did my job! 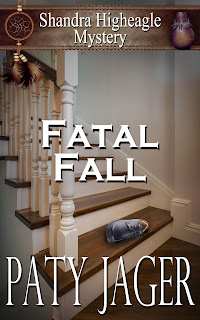 When the doctor is a no-show for her appointment, Shandra Higheagle becomes wrapped up in another murder. The death of the doctor’s elderly aunt has everyone questioning what happened and who’s to blame. Shandra’s dreams soon tell her she’s on the right path, but also suggests her best friend could be in grave danger.

Detective Ryan Greer knows not even an illness will keep Shandra from sneaking around, and he appreciates that. Her insight is invaluable. When she becomes embroiled deeper in the investigation, he stakes out the crime scene and waits for the murder to make a tell-all mistake.

But will he be able to act fast enough to keep Shandra or her friend from being the next victim?

Paty Jager is an award-winning author of 30+ novels, a dozen novellas, and a passel of short stories of murder mystery, western romance, and action adventure. All her work has Western or Native American elements in them along with hints of humor and engaging characters. This is what Mysteries Etc says about her Shandra Higheagle mystery series: “Mystery, romance, small town, and Native American heritage combine to make a compelling read.”