Most people who read or write books also like plays and movies. I've even had the notion I should write a screenplay.

I've been a movie fan for as long as I can remember. It started at an early age. When I was a small child, I lived with my grandparents. Their home was in a rural West Texas town that wasn't much more than a village really. We had scant outside entertainment, but we always had books, magazines and newspapers around the house. This is where I learned to read and love and sometimes watch fiction.

A movie was a rare treat. Two or three times a year, "tent movies" would come to town and stay for a week or so. They would set up a big tent in what passed for the town square, line up metal chairs for the audience to sit on and show a repertoire that included everything from silent movies accompanied by piano music to the "talkies." Sometimes we even had music where you could sing along, following the bouncing ball on screen. I think the price of admission might have been a quarter or less.

I found this picture on a site called "Old Magazine Articles," which tells about the traveling tent movies. It hauntingly reminds me so much of my childhood. If you want to read more about this slice of Americana and see more pictures, here's a link: http://www.oldmagazinearticles.com/Traveling-Movie-Theaters-pdf

I and my great-grandpa were enthralled by those old movies. He walked to town every night to watch whatever was shown on the screen, good or bad. He was past 80 and practically deaf, so he had to sit on the very front row. I sometimes went with him, though I didn't get to go every night.

What was even more fantastical was they had buttered popcorn and cotton candy. I was fascinated by cotton candy. As I recall, it cost a nickel.

I'm still a movie fan and that's what my post is about. My husband is a movie fan, too. Or at least, he used to be. Last week, we decided to watch a 5-star movie on Netflix called "The Place beyond the Pines." I don't think we got half-way through it. Can you say dark and depressing?

We moved on from there to Amazon and another 5-star movie called "Winter's Bone." Didn't finish that one either. More dark and depressing. Then we chose "Hello, My Name is Doris," also well reviewed.  Didn't even get a quarter of the way through that one and I used to be a fan of Sally Fields. 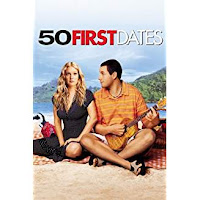 We ended up watching "50 First Dates" with Adam Sandler and Drew Barrymore, a movie that had terrible reviews. It did have good reviews on Amazon from people who bought it and watched it. Believe it or not, we actually finished that one and furthermore, we liked it. It presented an interesting situation, I liked the premise and the performances of the actors and it was upbeat.

Every movie they make these days, if it isn't car crashing and giant robots fighting, it's dark, Dystopian themes telling me how grim the future is going to be. I don't want to think about that. Dark and depressing isn't where I park my imagination. I see enough of it on the news.