Horses and a Free Book


One of my current WIPs, THE HORSEMAN, is a romance in which the hero is a horse trainer extraordinaire. Some even think he's a horse whisperer. This is the same book I wrote about a while back where the heroine has suffered a rattlesnake bite. 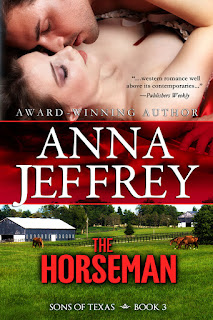 A few real live horse whisperers are around. One of them is Buck Brannaman on whose personality and occupation the character of Tom Booker in the book and movie, "The Horse Whisperer," was based.

In the book I wrote a few years ago, THE LOVE OF A LAWMAN, the heroine is a horse whisperer.  I did quite a bit of research about this phenomenon back then, but since then, I've done more. One of the things I've done is watch the movie about Buck Brannaman and I've read his book. I've also watched several documentaries about wild horses and why they behave as they do. Horse society and herd hierarchy is interesting information and you can't keep from being drawn to it.

Nor can you keep from being drawn to horses. It appears that the most important element is earning a horse's trust, which is no small feat. Since they are prey animals, they instinctively know that human beings are predators and and they have an innate fear of them. As a matter of survival, they want to get along with people. Basically, they already know how to do the things that people want them to do, but they have to be taught when to do it and that it's okay for them to do it. Those who are successful horse trainers and whisperers have the patience and interest in establishing the trust that is necessary for a good outcome. Some of them believe that problem horses are an extension of problem owners or owners with problems.

People who know horses claim they are just as smart as dogs and just as loyal, up to giving their lives for a human being they trust.

I've never had a horse of my own, but from the research I've done, I wish I did. I wish I had been involved with horses all of my life. I wish I were a person that a horse could trust.

By the way, THE LOVE OF A LAWMAN is currently free at Amazon and will be for 4 more days.
Posted by Unknown at 1:00 AM

Email ThisBlogThis!Share to TwitterShare to FacebookShare to Pinterest
Labels: Anna Jeffrey, award-winning romance, contemporary romance, cowboys, horses, steamy romance, THE HORSEMAN, The Love of a Lawman, western romance, You Can Have my Heart but Leave My Dog Alone