Last summer I was asked to write a book in another author's world. I was a bit leery. I not only had to gather information about that author's world, I still had to meet other deadlines. Could I do this and stay sane?

Several of my author friends told me I'd be crazy to pass up this opportunity to get my writing in front of another author's readers. With these friends urging me on, I signed on to be one of 14 authors writing in Debra Holland's Montana Sky World. 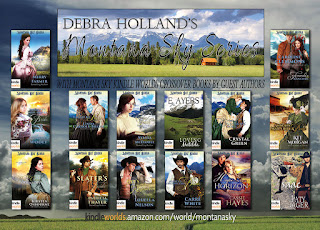 Debra graciously said we could put our characters from our series into her world. I had just came up with the idea of a new series and started brainstorming how I could incorporate my new Letters of Fate series into a book set in Sweetwater Springs and Morgan's Crossing, Montana. I needed a letter to arrive to someone in Morgan's Crossing that would change his or her life.

Upon several conversations with Debra and reading her book Prudence, which was her first book set in Morgan's Crossing, I learned there were many miners and only ten women in the town. So I needed to bring a woman to Morgan's Crossing. Debra had mentioned mine guards. Visiting more with her I decided to make my hero be one of the mine guards. He nurses the heroine's father when he becomes ill and eventually dies. The hero, Isaac, sends a letter and the man's last wages to the family believing he was done with that. He receives a letter from the man's oldest child and daughter saying she is coming to fetch her father's things. Isaac isn't happy. The man had two sets of clothes. The ones he had on when he became sick were filthy and he burned them. He'd sent the only thing of value to the family and was angry he had to lose four days work to travel to Sweetwater Springs and hand over the battered and filthy clothes to the woman, who'd set his hackles up with her tone in her letter.

I passed this scenario by Debra, she gave it an enthusiastic thumbs up and I started researching and writing Isaac: Letters of Fate, part of Debra's Montana Sky World.

While working on this project I enjoyed the back and forth between myself , Debra, and the other authors who wrote a book in this world, but I learned a lot about myself. I like to have complete control over my characters and the world they play in. My introvert self, came out in my story, sending my characters away from Morgan's Crossing and off on their own. This gave me more freedom to write without worrying about keeping true to someone else's world or characters.

This project taught me a lot about myself and my writing process. 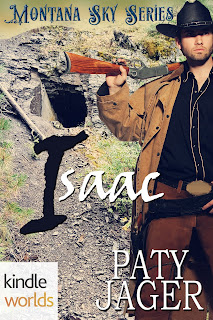 Alamayda Wagner’s life has left her cynical, but also vigilant, and that’s what propels her to Morgan’s Crossing, Montana in order to uncover the secrets her father took to his grave. She quickly discovers her only hope includes trusting Isaac Corum. That soon proves to be expensive, and not just financially.

The last thing Isaac Corum needs or wants is a snooty woman telling him he didn’t do enough to save her father, which is what her letter implied. He’d helped the man more than most people would have, and swears he won’t go out of his way like that again. He’ll meet her at the Sweetwater Springs train station, deliver her father’s belongings, and send her back the way she came.

But, dang it all, the woman doesn’t do a single blasted thing she’s told, and Isaac can’t just sit back and let her go traipsing off into the mountains alone…
http://amzn.com/B01BL0HKJQ
Posted by Paty Jager at 12:01 AM