Bound for the Hills-- coming in March

When I have finished a rough draft, my mind is still into the story. But, immediately I must transition to figuring out promotions for when it comes out. Those are required if I want anybody but me to see it. So I write a blurb, some promotional material, and research various ad sites (so far haven’t done ads, but I try to get informed on what worked or did not for other authors *hint hint*).

Bound for the Hills is set in central and southern Arizona and is seventh in the Arizona historical romance series. It is also the third involving the Taggert brothers, er make that the surviving Taggert brothers-- Vince, Cole, and Jesse.

Vince was the hero in Echoes from the Past; Jesse in Lands of Fire. Cole appeared as a secondary character in the first and in the epilogue for the second, where his sisters-in-law wonder what he's been doing, but even more hope to get him a match, so that he'll be around more. Their reasoning is that when a man gets married, he is more interested in family. With their own families growing, they are into nest building.


For the third Taggert book, the challenge, as a writer, was finding a woman who would attract a man who doesn't want much to do with family and most especially avoids the kind of woman with whom he might fall in love. Cole had too many years of doing for others. He's now experiencing freedom. No way does he want a wife. What kind of woman would change his mind? I found her in Willy, my first author heroine.

In a way I am surprised, after twenty-five books, that Willy is the first writer, but despite having heroines in the arts-- sculptors, painters, photojournalists, musicians, I hadn't had an author. A writer heroine enabled me to play around with literature and the question of what makes some books considered literary while others are regarded as pulp.

Then I had to decide where the story would have most of its action. An Arizona historical romance has a lot of possibilities. I had set most of the Arizona series around Tucson but had delved south to the border and north to the White Mountains. This one ended up between Tucson and the Mazatzals.

For my writing, settings for my books are characters in the story. They will always be where I have been and know the scents on the air, what would be in the small, dark places, the energy of the earth, the trees, the water. My desire, to stick to places where I have spent time, may come from my early love of Zane Grey's books where he always made the land come to life. I don't go for lengthy descriptive passages. I am not writing a travelogue, but I want the reader to know how the land will impact the characters, how its energy permeates their lives. Arizona is perfect for that sort of writing.

Some don't know that it was not until February 14, 1912, that Arizona became the last state in the continental United States. It wanted to be a state much earlier, but those already in the Union didn't want it admitted. After all, it was a place of feuds, unruliness, violence, and law breakers. As an author, those elements of danger, added to its diverse cultural history, are what make it such a great place to set a romance. 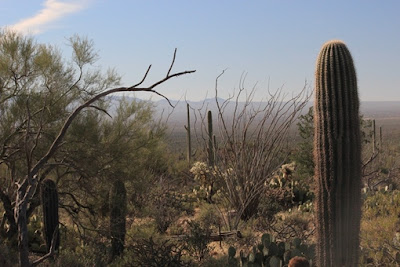 The new book trailer is at: https://www.youtube.com/watch?v=SzytwKPgJ9o. I don't know that trailers ever help a reader decide to buy a book, but I enjoy creating them. I like mixing up the characters, landscape, words, and music to add a more physical element to the words I just wrote.

Bound for the Hills will be out early in March, not sure of the exact date yet as it needs one more edit. Then I will be writing a few shorter, contemporary, Tucson-based, suspense romances (still trying to come up with a title for the series). I have had over a year of writing long books (Bound for the Hills is 110,000 words). I also want a change from historicals to something in my own era. The next books will all be set in Tucson and probably Barrio Viejo (wish I could use that for the series name, but I fear readers would assume it's primarily about Spanish speaking peoples, and it's not).
Posted by Rain Trueax at 1:00 AM