I'm continuing the discussion Brenda started on book covers. Do they make or break sales? Do we expect the cover to closely match what's inside? I do. I don't want a blonde woman on the cover and a redheaded heroine within the story. It strikes me odd to see spring flowers on the cover and have the story take place in the fall.

I write eBooks and read books only on my Kindle. Some people enjoy the feel and smell of a paper book. I like the lightweight convenience of having over eight-hundred books on my eReader, including my own paltry fourteen stories.

Authors do care about their covers. We have a vision of how we want our story or characters portrayed. Do we always get what we want? No. Heaven's no! But we can politely suggest once the team for our books sends three or four prototypes for our covers what suggestions we'd like and why. I write for Penguin Random House's romance eBook line--Loveswept.

Let's talk about my Highlander's Beloved series. Book one was A Highlander's Obsession and book two, A Highlander's Passion. I wrote book three as A Highlander's Heart, but the team wanted something leaning more toward the paranormal side of the series, so they changed my title to Bearing It All. These were romances about bear-shifters. The team thought a change of title would improve my sales.

They emailed me 3 cover concepts. The one I liked had a font I thought was hard to read. I asked for the same font used in books one and two. I also wanted the bear larger than they had him since he played a larger roll in the book. He was quite the lovable bear, impetuous, and a nervous eater--and not prone to obey the shifting rules. Here's what they gave me... 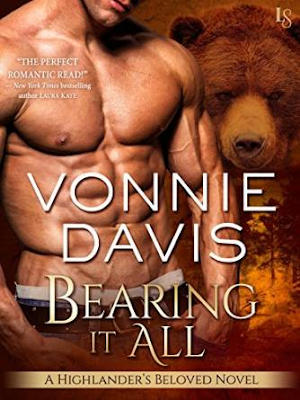 I'm writing a series now about wounded warriors, former SEALs, who form a covert ops team stationed in the hill country of Texas on Eagle Ridge Ranch. The team--editor, editor-in-chief, online marketing, advertising, graphic artists--chose all three of the books' titles for me.﻿  My hero has an amputee below his one knee and deals with PTSD. He had short dark hair and a square chin.
The first concepts they sent me ranged from a man in military-style clothes and a plaid ball cap--plaid, I tell you!--to a skinny armed guy to a young kid. My hero had been in the SEALs for ten years so the kid shot was out. A person with a leg amputee would exercise his upper body to build up muscles to overcome the change to his lower mobility. With that thought in mind, the skinny armed man was out. That left the plaid hat man. I asked to have his hat removed, showing only his chin. The font they used was grey. I wanted colors that popped out. I asked for a few changes and this is what I got. 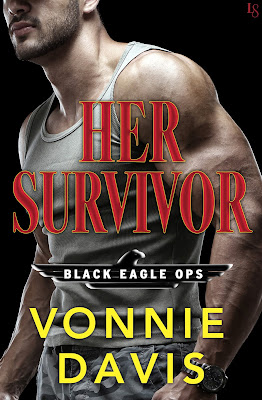 I'm not shy about stating what I want. I give them example pictures and links to covers I like AND dislike. I'm polite, but insistent. Do I always win. No, but we usually come to a happy compromise and that's all I ask.
Visit me on my Amazon page http://www.amazon.com/Vonnie-Davis/e/B0059HUKMC/ref=sr_tc_2_0?qid=1456371206&sr=1-2-ent