REVIEW OF BETH TRISSEL'S THROUGH THE FIRE


Through The Fire by Beth Trissel takes place during one of the most turbulent times of American history, the French and Indian wars. Rebecca Elliott is fleeing an abusive father and taking her sister, Kate, with her to Fort Warden. The plan is to meet up with an uncle she has not seen in many years but remembers him as a kind and loving man.

As they travel by horse back through the forest, they are attacked by Shawnee warriors who are allied with the French. The battle is fierce, many men are killed, and a few are taken captive. Rebecca helps Kate to escape capture, but is captured herself by a warrior named Shoka. 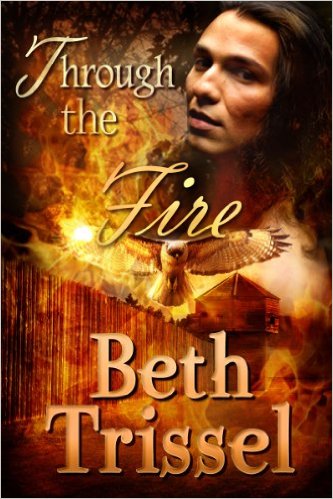 This battle scene reminds me of the movie version of Last of the Mohicans.  Beth Trissel’s ability to bring together the sight, sound, and emotion of the scene is amazing. This scene in her story places me perfectly into the time and fills my mind with a perfect representation of how it would look and feel to be there. Ms Trissel’s story, Through The Fire, is not a rehash of the classical Last of the Mohicans. After that first scene, so brilliantly told and placing the reader right where she wants them, Ms Trissel weaves a beautiful story of growing love and respect between Rebecca and Shoka.

This journey through the frontier is nothing short of just plan hard for a woman raised as a Lady. But you soon learn there is more to Rebecca than just a pretty face. Her past abuse has molded her into a person determined to take care of herself and those she cares about. This inner strength helps her to survive and to help others dear to her heart to survive as well.

I love when a book is so well written that it transports you right into the story and holds you captive. This book did that for me all the way to the end. Through The Fire is filled with tremendous challenges, and heroic rescues. It contains a touch of Native American mysticism and ends it with a mystery.

Need I say it? This story rates 5 STARS for me in all aspects, plot, strong     characters, adventure, and I always get excited when an animal wanders into the story and you know there is a special meaning.