Home for the Holidays by Paty Jager

Most people think fondly of going home for the holidays, be it Thanksgiving or Christmas. When my children were young we'd swap Thanksgiving and Christmas each year with his family and mine. After my mom passed away my dad usually came to our house for Christmas and sometimes Thanksgiving.  But I remember the thrill even as an adult of going home and the memories of past holidays and the anticipation of spending another holiday with family traditions and instilling those traditions in my children.

When I'd decided to write Shayla's story, a younger secondary character from Miner in Petticoats, I thought about that yearning to be home for Christmas. She was asked, not invited, by her older brother to return home to Sumpter when he and his wife and children were returning. But she refused because she always did the opposite of what her brother wanted just to be contrary. However, when her friend suggested they could arrive by Christmas and he would ask for her hand in marriage, she jumped at the adventure of traveling with her friend and surprising her family. 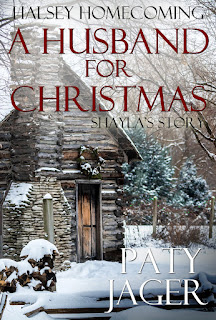 Here is the blurb for my new Christmas Novella, A Husband for Christmas.


Final Novella in the Halsey Homecoming and Halsey Brothers Series

Shayla Halsey wanted to be home for Christmas, but never imagined her travels would include spending the night in a brooding stranger’s cabin. Snowballing events cause her to look inside herself and recognize maybe it wasn’t being home she wanted as much as it was to have a home.
Mace Walker has his life in order and doesn’t want it disrupted again. Yet, when he discovers a woman stranded in the snow, he has to help her—despite her overbearing and reckless fiancé. In a matter of days, Shayla turns his life upside down and forces him to decide if he should leave town or face the consequences.

Excerpt:
Mace started at the top, grasping the button and pushing it through the hole.
“Thank you,” Shayla said, more breathy than she’d wanted. His intense stare at each button as he fastened her clothing had started her heart pumping like she’d ran all the way from Baker City.
“Get your hands off her!” Randal took three steps toward them.
Mace glared at him and Randal stopped.
“Y-you shouldn’t be touching her like that,” Randal said, staying on the other side of the table.
“She can’t do it.” Mace continued buttoning her shirtwaist.
“I should be the one helping her. I’m her fiancé.” Randal took another step forward.
Mace glared at him and glanced down at Shayla.
“You plan to marry him?” Mace asked.
Under his scrutiny and sitting with her top only half-fastened, she cleared her throat. “I haven’t said yes.”
Randal charged forward. “You agreed to come here as a way for me to ask your father for your hand.”
Shayla trailed her gaze over Randal’s familiar mouth that stayed in a perpetual smile. It was turned down at the corners now. His usually twinkling eyes were wide with surprise. He was the boy who made England not so lonely and glum.
Mace leaned back. “Are you going to marry him?”
Shayla turned her gaze on Mace. His full mouth didn’t turn up at the corners, and she’d yet to see a smile. His eyes peered into hers. Her stomach fluttered. Looking at Randal never gave her the thrill that staring into Mace’s eyes did.
“I don’t know.”