First, a quick thank you to Geri Foster for stepping in for me while I was on vacation. I love her new series and highly recommend them.

Travel has always been my second love. Reading and writing are my first. This year, I had saved enough money to take a trip to Scotland. Now, Scotland in May is cold, wet and windy.Actually, it's like that in August, too from what I was told.  It is also beautiful.

Why Scotland? Bobbie Burns, Robert Louis Stevenson, J. K. Rowling and  Outlander  just to name a few reasons. I'd been to Gt. Britain before, but not Scotland.

The adventure began landing at London Heathrow International. Never, ever make a connecting flight from this nightmare of an airport. I trudged miles of hallways, then had to catch a bus to another terminal and trudge down another set of hallways, then go through very tough security barely making my flight to Glasgow.

I finally found my tour group. They were all waiting for me. Great way to start, but fortunately, they were a nice bunch  of Aussies, Canadians and Americans. Our guide, John, said he was grateful there were no New Zealanders because they were notorious for wandering off and doing their own thing.

This trip was a bit odd. We had schedule changes and substitutes, but everything worked out. I climbed winding stair cases in castles. Sat on the banks of Loch Lomand. 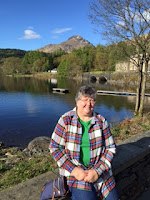 Walked over ancient cobble stones. Heck, I even tried haggis. I'm pretty sure the haggis served now is nothing like the original. It wasn't half bad. Kind of like peppery stuffing made with oats.

My tour is well known for nice accommodations. Poor John, he warned us before we got to the Isle of Skye that we were in for a shock. It seems there are only two large hotels on the island and only one that takes large tours. He apologized ahead of time, so we all knew this might be a challenge. This place turned out to be something out of a t.v. comedy. But real. Horribly real.

I was handed a huge,old fashioned key and pointed to a corner stair case. Once again, I found myself walking down narrow hallways, up and down stairs and  trying to figure out the numbering system on the doors. Imagine my shock at the tiniest room I've ever seen. A narrow twin bed and tiny bathroom. Although it was dark, it was clean.  Then, the fun began. They have a very, very sensitive fire alarm. Steam from your shower will set it off. Each room has a giant red alarm that shrieks until a grouchy desk manager steps onto the offender's bed and shuts it off. That didn't happen to me, but three other guests shared their horror stories at breakfast. This went on all night, so no one got much sleep.

My bathroom came with an ancient blow dryer. A huge monstrosity from the 1980's. As I used it, an awful smell filled the room, then it started belching out smoke. The fire alarm didn't go off. Not sure if that is a good thing or not. 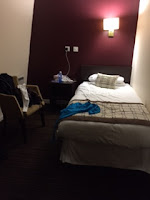 Luckily, the food was good and the bar was open.

Did I mention the staff was all Bulgarian? No matter what you asked them, you got a smile and a nod.  Thank goodness, the next night was in a Hilton Resort.

In spite of exhaustion, sore feet and dirty laundry, I already plan to go to London as soon as I can save up enough money. I'm a sucker for torture and men in kilts.