A Day in the Life by Suzanne Rossi

I often get readers asking me about my writing routine--how often do you write, do you have a word count quota, do you plot or fly by the seat of your pants, morning or evening?

When I first began writing, I could knock out a chapter a day--4,000 to 5,000 words at a time. Of course, it wasn't until years later that I realized I wasn't very good at it. The more I learned about the craft, the more my writing improved. Whole chapters a day became a thing of the past. Now I'm happy with a scene. Word count is no longer relevant. My daily goal is to write something good and cohesive.

I used to plot my novels out in 3-5 chapter increments. Then along came a book that demanded I keep writing--that happens. I discovered I could be what we call a pantster--just writing and worry about what you're writing later. Plotting takes time, but generally requires less self-editing. Plowing ahead with words will get me done with the book faster, but the editing process may take as long as 3-4 months. It's a push. Now, I use a combination of the two.

I'm a morning person. Before my husband retired I was up at 5:30 AM and after my second cup of coffee (a must have--can't function without it) I could get down to work. Now that he's at home all day (which took a lot of adjustment on my part), my day begins around 7:30 or 8:00. My writing day generally starts about an hour later. I also need to be isolated while I work. An office area with no window views and no distractions like TV is good. If the words are flowing, I ignore lunch. If not, I eat and go back to my work later.

That's it--a day in my life. Kinda boring to some, but once a character or plot get a hold of me, I don't find it dull at all.

Before I let you go, I'll take a moment for some blatant self-promotion. I learned earlier this week my next book, RENDEZVOUS WITH DEATH, will be released in all formats on August 29, 2015.

When reporter Shelley Jackson discovers the body of her friend and informant in an alley, she teams up with the dead man's brother, architect Jason Mallory, to solve the crime. But two more murders, a couple of arsons, and whispers of unsafe building practices tell them the deaths are connected to the city corruption being investigated by Shelley's newspaper.

Their relationship heats up with nights of hot sex while their search for the truth has buildings crumbling around them. But the killer is watching from the shadows of respectability and planning for the couple's demise. Can they reveal the killer before they become tomorrow's headline? 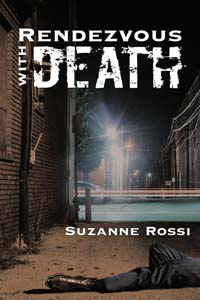 Thanks for reading today. Hope to see you again next month.