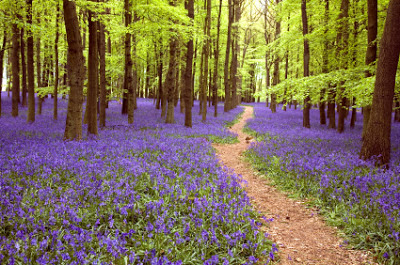 Our resident fairy expert, my ten-year-old niece, Cailin, has an inherent knowledge of fairies. However, it doesn't include Scottish bluebells (we're from Virginia). Cailin hung over my shoulder when I originally did the research for this post, and said the info rang true to her.

The Scottish Bluebells (Campanula rotundifolia) are known by various names, most commonly harebell, also Scottish bellflower and fairies thimble, as it was widely thought fairies live among the flowers. I don’t make this stuff up; these fascinating tidbits are from: http://davesgarden.com/guides/articles/view/1615/


“These lovely flowers have been around for centuries. Legend has it that fairies live among them and humans should be wary of disturbing them.” 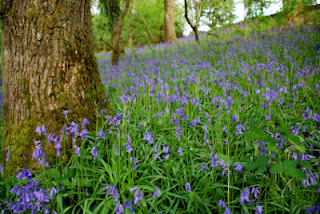 "The name, Harebell, has its roots in magic. The name came from the fact that Scottish Bluebells are found growing in meadows frequented by hares. Some would argue, the name Harebell was given this flower due to the fact that witches were known to turn themselves into hares and hide among them. Both are interesting stories, one for the non-believer and believer alike."

The flower is a favorite among poets. Two famous examples listed on the site:
“Sir Walter Scott mentioned it in his 1810 poem, “Lady of the Lake;” “A foot more light, a step more true, Ne’er from the heath-flower dashed the dew; E’en the slight harebell raised its head…”

Emily Bronte wrote, “I lingered round them, under the benign sky; watched the moths fluttering among the heath and harebells; listened to the soft wind breathing through the grass; and wondered how anyone could ever imagine unquiet slumbers, for the sleepers in that quiet earth.” in her book, “Wuthering Heights,” published in 1847.” 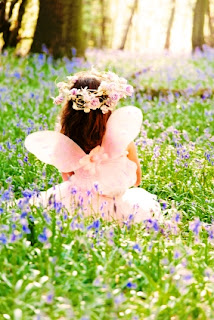 "Another name for bluebells is Dead Man’s bells. This is due to the fact that fairies were believed to cast spells on those who dare to pick or damage the beautiful, delicate flowers. The people of Scotland are fond enough of the flower to continue this tradition in the hopes of protecting the little flower.”

Apparently, when meandering through drifts of bluebells, it’s wise to stick to the path, or you may stir up the wrath of fairies and release the spells trapped in the blooms. Never a good idea, and one echoed by Cailin, who warns us never to step into a circle of flowers (a ring of toadstools is also off limits) or go anywhere without the fairies permission. They will get very upset, and you do not want an upset fairy, or fairies, on your hands. Particularly the furious wind fairies, but that’s another story.

For more on me, visit my blog at: https://bethtrissel.wordpress.com/
Posted by Beth Trissel at 7:47 AM