I don’t write the traditional Romantic Suspense. My action adventure books have romance tossed in to make it interesting. Think Romancing the Stone, Indiana Jones, or more recently Sherlock Holmes. There are bad people, good people, and different cultures mixed into a tale that is fast-paced, action-packed, and sizzles with romantic chemistry. 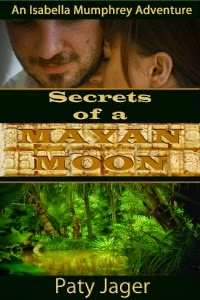 The first book, Secrets of a Mayan Moon, takes place in a Guatemala Jungle. Researching for this book was fun and daunting. Not only did I need to learn about life in current day Guatemala, but I also had to read up on the Mayan culture since my heroine is an anthropologist who specializes in Native American cultures.
To learn about the modern day culture, I found a Guatemalan blogger who had lived in the U.S. I asked her if she would be willing to help me keep my book authentic and she agreed. Once that hurdle was accomplished, I bought the books about the Maya with the best reviews and a book about archaeological digs.
The next item I needed to know was the underbelly of the country. I wanted a DEA agent out for revenge to come in contact with my heroine. I found him in Augustino Constantine, a Venezuelan who’s family had to flee Chavez's dictatorship and reinvent themselves in the U.S. However, when his father, mother, and brother were on a visit to South America while he was in college, they were gunned down over a remote landing strip owned by a drug lord. Having his family brought down in such a senseless way, sent Tino on a mission of revenge. Tino joins the Drug Enforcement Agency to fight against the drug lords and to get himself close to the man who ordered his family's plane be shot down. While undercover as a jungle guide, he also scouts out the routes the drug dealers are using in the jungle. I read online newspaper stories about the drug trade and corruption in Central America, also the growing artifact trafficking trade along with human organ trade. Using all this information, I put together a story that kept me typing at a frantic pace to keep up with my characters.

But of all the information needed to bring the characters and story to life, the most daunting part was having a genius level character when I am an average intelligence gal. I hope Doctor Isabella Mumphrey displays a genius IQ when I haven’t the foggiest notion what it would feel like.

Blurb for Secrets of a Mayan Moon:
Child prodigy and now Doctor of Anthropology, Isabella Mumphrey, is about to lose her job at the university. In the world of publish or perish, her mentor’s request for her assistance on a dig is just the opportunity she’s been seeking. If she can decipher an ancient stone table—and she can—she’ll keep her department. She heads to Guatemala, but drug trafficking bad guys, artifact thieves, and her infatuation for her handsome guide wreak havoc on her scholarly intentions.

Excerpt
She deposited her backpack on the floor at her feet. The horn handle of a twelve inch Guatemalan blade protruded from the side pocket. Tino’s curiosity spiked another notch.
“I have a reservation. Dr. Isabella Mumphrey.”
Tino snapped the paper down and stared even harder at the woman. This was the frumpy, old anthropologist he was to guide? His gaze scanned the length of her one more time while tuning in the conversation.
“Ahh, Dr. Mumphrey, Dr. Martin said you were to get the finest room, no?” The clerk acted like a simpering fool giving the doctor her key and expounding on all the wonders of the hotel.
“Gracias. May I borrow a paper and pencil? I need to make a list for the taxi driver.”
The clerk handed her the items. She stepped to the side of the counter and began writing.
Why would she make a list for a taxi driver? Curious, Tino folded the paper and strolled to a spot beside her. So intent on her list, she didn’t even acknowledge his presence as he leaned, reading the items. Army knife, candle, braided fishing line, hooks, swivels, 24 gauge snare wire…
“You are planning a trip into the jungle, no?”
She started at his voice. Deep green eyes rimmed in gold stared at him from behind wire-rimmed lenses. She blinked, focused on him, and narrowed her eyes.
“Didn’t your mother teach you manners? You don’t look over people’s shoulders to see what they’re doing.” She picked up her list and held it to her damp shirt.
“Mi mamá did teach me manners, no? I am Tino Kosta, your guide to the dig at Ch’ujuña.” He held out his hand waiting for her to shake.
Her gaze traveled from his extended hand up his arm to his face. She squinted her eyes and glared at him.
“You’re not of Mesoamerican descent, so you can’t possibly be my guide. Are you in cahoots with the disgusting little man who stole my property?” She bent toward her backpack, giving him a good view down the front of her blouse.
Si, she didn’t wear a bra. The nipples peaking through her clingy shirt sat atop a palm-sized mound. Now, being a man who liked his hands filled to overflowing when it came to handling a woman—


“¡Carajo!” The pointed end of the large knife that had been tucked in the doctor’s backpack waved inches from his nose. “What is this about?” A woman who ran around without undergarments shouldn’t be offended by a man viewing her body.

Secrets of a Mayan Moon is available at Windtree Press, Kindle, Nook  Kobo
Other books in the series:
Secrets of an Aztec Temple
Secrets of a Hopi Blue Star
patyjager.net
Writing into the Sunset
Posted by Paty Jager at 12:01 AM