THANKSGIVING AND A NEW RELEASE


Fall is a hectic time. Can you believe Black Friday sales have already begun? Every year the sales start earlier. Not that I mind a bargain, but really?

What are you doing for Thanksgiving? This year, we’re having Thanksgiving at my daughter’s house, so I’m off the hook as hostess. I’ll still bring some of the food, but I won’t have to prepare turkey or get the house ready for the invasion. Yes, invasion is the right word because we’re a large clan.

My daughter acting as Thanksgiving dinner hostess leaves me more time to write. And I’ve been writing up a storm. No, don’t blame me for the cold front—not that kind of storm. I’ve released my latest Falcon Securities novel, OUT OF THE DEPTHS. I love writing romantic suspense, action-packed novels, but they leave me exhausted. By the time I finish a Falcon novel, I am limp as a wrung out dishrag and feel as if my brain has exploded.

Falcon Securities Agent Jake Taylor has been sent to protect a young woman who’s out to avenge the murder of her DEA brother . . . Trouble heightens when an Afghan extremist is involved, along with politicians and government employees trusted to protect the country.

Tessa Adams is out to kill Antonio Ramirez, the Mascota Cartel drug king who murdered her brother. While working undercover on her own, she not only steals the drug lord’s money, but uncovers valuable information that can either put the killer away for life . . . or send her to a watery grave. The only person she can trust is the Falcon agent who promises to protect her.

Can Jake and Tessa find the homegrown terrorist who threatens American shores in time to save the lives of millions? Can Jake bury the past and find happiness? Will love break the hold revenge has on Tessa’s heart? In the midst of destruction, corruption, and lies, can these two people who deserve love find it, or will they lose everything? 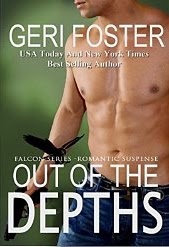 Excerpt of OUT OF THE DEPTHS:

Jake swam as fast as possible. His eyes stung and his lungs hurt, still he couldn’t find her in the opaque water. He dove further knowing if he ventured much deeper he wouldn’t be able to surface for air.

Scissoring his legs, he clawed through the water descending deeper and deeper. Then he caught a glimmer of long auburn hair swaying beneath him. He thrust harder.

Jake instantly regretted there was no way to apply brakes underwater. Below him, sharks circled Tessa while she bobbed helplessly.

Ramirez must have really hated her. Obviously her cover as their accountant had been blown, and they’d only taken him because he was in her company. They didn’t know he was from Falcon. At least, they hadn’t mentioned anything.

A Tiger Shark headed in Jake’s direction. He allowed his body to drift. The killer nosed around a little but soon lost interest when Jake tried to appear more like debris and less like a meal. That didn’t mean he hadn’t wanted to scream like a girl.

His head pounded and vision blurred. Jake ignored the sharks and continued toward Tessa. Reaching her, Jake saw her entire body shaking with terror.

Her eyes wider than a window, her gaze darted between him and the pod of Tigers circling them. She grabbed for him, but Jake stayed clear for a moment. He put his finger to his lips to calm her. By now, he was completely out of air and close to passing out.

Coming soon to other sites.

Whether your family is large or small, have a wonderful Thanksgiving! 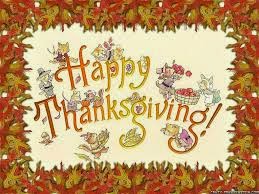