This fall I am indeed fortunate because I have multiple releases. As an author, productivity is important. How else can an author hope readers will remember my name and look for my books? Readers are who keeps authors motivated to please. We court you and pray you'll buy and enjoy our books.

I don't write literary fiction. No angst-filled downers from the authors on this blog. I seek to entertain readers and to provide an escape from whatever problems devil readers. Books I write guarantee a happily-ever-after for everyone but the villain.

Please let me share another occasion with you. WILD WESTERN WOMEN, my latest release, is a boxed set with four other authors.  For this release, we have a gift card, free downloads, and several lovely pieces of jewelry. You can enter at the Rafflecopter at the bottom of this post.

The five novellas and two bonus short stories are:

USA Today Best Selling Author Kirsten Osbourne – MAIL ORDER MISUNDERSTANDING
Julia traveled West to be a schoolteacher. Thomas requested a mail order bride. When he arrives at the train station to pick up his bride, Thomas mistakenly thinks Julia is there for him. Julia sees Thomas and thinks he's there from the school board. She's married an hour later.

USA Today Best Selling Author Callie Hutton – A CHANCE TO LOVE AGAIN
Widow Rachel Stevens is very happy with her job as a cook for the Lazy Sunset ranch where she is raising her son. However, the new foreman, Rusty McIntyre, is turning her life upside down. She could overlook how her son has begun to idolize Rusty, but she’s having a heck of a time ignoring the flutters in her stomach every time the man smiles at her.

But Rusty has problems of his own. His previously unknown fourteen year old daughter has just arrived to live with him. Used to always being on his own, now he has a young boy following him around imitating his every move, and a surly young lady glaring at him. Throw into the mix the tug he feels toward the ranch cook—who wants no part of him—and life is no longer as easy as it once was. 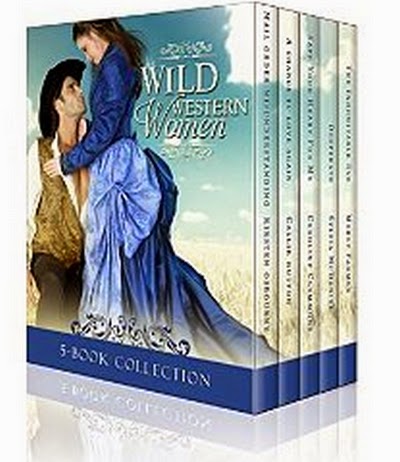 Best Selling Author Caroline Clemmons – SAVE YOUR HEART FOR ME
After fleeing an abusive husband six years ago, Beth Jeffers wants nothing more than to protect her son Davey and to help her mother operate a Texas Hill Country boarding house. The strong women in her family have had no luck with men, and she has no intention of letting any man influence her son. Not even handsome lawman Matt Petrov, no matter how much her lonely heart urges otherwise.

Federal Marshall Matt Petrov, also known as Lone Wolf Peters, fell in love with Beth the first time he saw her. Then she was another man’s wife, so he kept his longing a secret. But he’s saved his l heart for her for six horrific years. Now, the lovely widow and he have crossed paths again. This time, he intends to risk all for a chance at happiness. First he must rescue his distant kinsman from an assassin’s clutches and protect Beth’s son Davey from the villain. Mystery, kidnapping, and twists await Matt and Beth. But will Matt’s secrets shatter the love he and Beth share?

Best Selling Author Sylvia McDaniel – DESPERATE
After the death of their father, the McKenzie sisters, Meg, Annabelle and Ruby try the normal ways for women to earn a living in a small western town. When they fail, the McKenzie sisters decide to take up their father’s profession, bounty hunting. They quickly learn they can use their feminine wiles and their Baby Dragoons to earn their way in the old west. They’re tough and resilient, badass women in this historical western novella. Kick off the adventure with the first installment of the new series, Lipstick and Lead with Desperate.

Best Selling Author Merry Farmer – THE INDOMITABLE EVE
The one thing Eve deLaurent has wished for in the two years since her sister, Amelia, was whisked away to America was to be a family again. But the tragedy that befell her once Amelia was gone has left her wounded, body and soul. Now, reunited with her sister, all Eve wants to do is run. Amelia’s new, happy life is a betrayal deeper than Eve can stand. She would leave and never look back, were it not for Mark Andrews.

As Cold Springs’s reverend, Mark is used to people confiding their darkest sins and looking to him for help. So when he sees the pain behind Eve’s mask of confidence, all he wants to do is help her. But Eve awakens a desire in him that reminds him that even a man of God is still a man. They seem to be everything the other wants and needs, but can the people of Cold Springs accept an actress in their pastor’s arms? Can they be together if bitter family betrayals keep Eve and Amelia at each other’s throats?

You’re only as strong as the loves that hold you together...

Plus bonus stories from Caroline Clemmons, "Stone Mountain Reunion," and from Merry Farmer, "A Hero's Heart"

All of this at the bargain price of 99 cents!

a Rafflecopter giveaway
Posted by Caroline Clemmons at 1:30 AM