July 4th, is Independence Day in the United States.  We celebrate freedom and the entrepreneurial spirit.  It's our day of "liberty and justice for all," hotdogs, and a cold one.

Nowhere in fiction is that spirit shown better than in historical novels set in the Old West.  The brave men and women in our books risk their lives every single day for the freedom to live and love the way they choose.

Independence Day in the Old West

Guess which holiday was the most celebrated holiday in the Old West?  Not Christmas.  It was Independence Day—because it fell on July 4th, which means good travel weather.  Western citizens had sack races (yes, even the children bet on them), horse races, picnics, dances, base ball games, riding tournaments (not yet called rodeo), and some places even had fireworks.  Not the save and sane kind, either.  Everyone celebrated.  Brothels ran specials and saloons did a landslide business.


Western Historical Romance is my favorite of all romance sub-genres to read (yes, I write it, too), even though I read many romance sub-genres as well as other genres.  One of the reasons I love WHR so much is because of the independent spirit, the determination to carve a good live, and the confidence that despite the danger, they will prevail.  Gotta love it.


That same ethos is, of course, the mainstay of traditional westerns.  Rooster Cogburn had a rather odd set of morals by today's standards, but he stuck to 'em, by durn.  The Man With No Name didn't profess to have any morals, yet he was the epitome of a man who set his own boundaries.  Laura Engalls told of a time when people did their best to be honest and forthright while working hard to tame a new country.


Sometimes we forget how tough our pioneer antecedents really were.  I've been complaining of the heat--we don't have air conditioning.  Well, no one in the 19th century had central air.  Homesteaders had to carry or pump their own water, chop wood, scrub laundry on a washboard (then hang the clothes to dry, and *fans self* iron them), bake bread, and do all the farm chores whether it was a sizzling 110 degrees, or a freezing 30 degrees below zero.  I'm not saying they liked it, but they did it, and built the good life we enjoy today.

Hell on the Prairie

On July 2, Western Fictioneers released Wolf Creek, book 6: Hell on the Prairie.  This is a collection of short stories all centering around Wolf Creek, a fictional town in Kansas, or Wolf Creek citizens.  It's a traditional western and yes, I have a story in it!  I'm so excited about this--my very first story outside of the romance genre. (I should explain that the first five books in the series are novels.  WC 7 & 8 are also novels to be released later this year, and WC 9 is a Christmas anthology.  The anthologies give the WC authors a chance to expand on their characters in a way not possible in the novels.)


It's six years after the Civil War, but bushwhackers are still on the loose.  The residents of Wolf Creek have to deal with bad weather, outlaws, provoked Indians, and a considerable amount of vice.  In Wolf Creek, Book 1: Bloody Trail, the town is attacked by the Danby Gang, a group of former Quantrill's Raiders members.  Do the people crawl into a hole?  No, they do something about it.  I really enjoyed this book so much that I wanted to be part of the WC crew, all writing under the house name Ford Fargo. 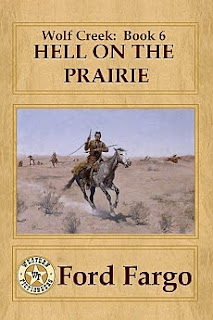 Here's an excerpt of my story:
Muleskinners: Judge Not
by Jacquie Rogers
a short story in
Hell on the Prairie
Wolf Creek Book 6


My pa wanted to see the Pacific Ocean. He’d flapped his lips all the way from Missouri to the middle of Kansas and I reckoned by the time we did get to the ocean, I’d be ready to dunk him in it.

“One of the mules is lagging.”

“Hermes,” I hollered. “Quit sniffing that bush and get over here.” Sure, my mules were coddled, but they’d been my only company for a year during the war, and the six years since, my best friends. “You know you’re supposed to stay by the wagon.”

The mule sent me a guilty look and trotted to his spot by the rear wheel with the other three. I have eight mules, but a harness for only four, so four mules pulled half a day, then I traded them out.

“Wouldn’t it be easier to tie the spare mules to the wagon, Elsie?” My father, Obadiah Parry, had lost his wife, son, home, and thought he’d lost me and the mules in the war, but he’d run into me a few years back.

Believe me, the moment I saw that man was the happiest day of my life. His brown hair had grayed and he’d hunched over and slowed down considerable, but his blue eyes still had that sparkle—the one that let you know there very well could be a frog in the sugar bowl, so watch out. I wouldn’t call him a moocher, but he did let me do the working while he did the talking.

“Maybe, but I ain’t tying them up. They know their jobs.” Unlike Pa, who was more of a dreamer than a doer. The one dream he had that worked out was when he decided to start a draft mule business with a mammoth jack he’d won in a card game. He talked the local farmers who had quality draft horse mares into giving him one foal for every two breedings. The result was more than a dozen draft mule foals the next year, but then the war broke out.

Now his dream was to go to California. I had eight of the mules, the wagon, nowhere else to go, and I was happy to make up for lost time with my pa. He had the gift of gab and a hefty dollop of charm, which got me more than one well paying freight job. We had a light load this time, though—supplies for the trip west. But we had to take a detour to Wolf Creek to pick up a wagon he’d won playing euchre last week.
♦♣♥♠
What they don't know is Wolf Creek is under siege, and they're in the way.  Find out what happens when Elsie and Obadiah are beset by outlaws--a few surprises await you!

Table of Contents
Wolf Creek, Book 6: Hell on the Prairie
Hell on the Prairie, by Troy D. Smith
Drag Rider, by Chuck Tyrell
The Oath, by Clay More
It Takes a Man, by Cheryl Pierson
Asa Pepper's Place, by Jerry Guin
Muleskinners: Judge Not, by Jacquie Rogers
New Beginnings, by James J. Griffin

Here's wishing you
a safe and happy 4th of July!

Posted by Jacquie Rogers at 4:51 AM