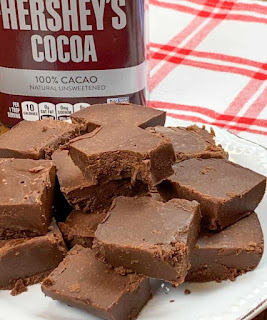 This week on social media, there was a recipe for Hershey’s Fudge. This is not the fluffy type with marshmallow cream, but a dense hard type of fudge of my childhood.

When I was a kid, my mother often made fudge from the recipe on the side of the Hershey’s Cocoa can. I can still see her sitting on the old wooden porch swing, beating the fudge until it was creamy. One side of chain holding the old swing broke, and Mom never missed a beat as she slid down to the opposite side of the swing.

She often made this as icing on a yellow cake, and it was so yummy we kids would eat the icing off and she would have to make a second batch for the cake. This happened so often that finally Mom started poking holes in the cake so the icing would not be so easy to steal.

Over the years, I have made this many times, occasionally overcooking it to sugar and just as often, not cooking long enough and having chocolate syrup. Either way, the evidence was yummy.

Below is the recipe- Enjoy!

Line an 8 or 9-inch square pan with foil. Generously grease the foil with butter. (We never used foil, we just buttered a plate)

Combine the sugar, cocoa powder, and salt in a large, heavy saucepan over medium heat. Mix well. Using a wooden spoon (do not use a whisk), stir in the milk. Cook, stirring constantly, until the milk comes to a full, rolling boil. Let it boil without stirring until it reaches 234 degrees F on a candy thermometer (soft ball stage, drop a small amount in very cold water to test it - it should form a soft ball that flattens when removed from the water).

Remove the pan from the heat. Add the butter and vanilla to the saucepan but DO NOT STIR. Just let the mixture sit until it has reached 110-120 degrees F.

Once cooled, beat the fudge with the wooden spoon until it thickens and has lost some of its glossiness. Quickly spread the fudge in the greased pan. Let cool slowly (do not rush the cooling process or it may not set up) then cut into squares when completely cooled. Store the fudge wrapped loosely in foil in the refrigerator.