Dogs Are the Most Fun by Joan Reeves 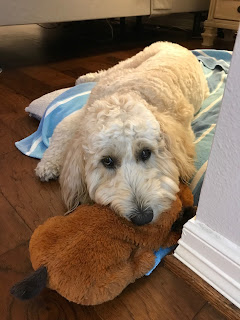 Good morning! This is Freddie, our granddog.

We're dog sitting this week which means we get a LOT of exercise because he's a Golden Doodle, half golden retriever—you know how active they are—and half poodle, also a playful active dog.

Freddie sleeps with Puppy, that's the brown stuffed animal he has in his mouth. It's so cute the way he snuggles with Puppy at night.

Having Freddie in the household also means I get up at least 2 hours earlier than usual. When he awakes, he first prowls around our bed making soft woof sounds.

If that doesn't penetrate our sleep, he progresses to little whines. If that doesn't work, he jumps up on the bed and lands like a fifty-pound bowling ball between us.

Once outside, he doesn't dash to the grass immediately. First, he goes to the wrought iron fence across the breezeway and stands there, delicate nose quivering as he gets the latest news from the animal kingdom. 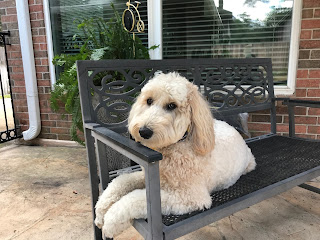 Satisfied with what's going on at crack of dawn, he prowls around the patio, following the scent trails of the many squirrels who think they own this property, and we're the intruders.
After that, he scopes the perimeter of the house and the fence, stopping at his favorite places—the stone edging around the Purple Passion shrubs, the pole that holds the birdhouse aloft, the corner of the garage near the azaleas just to name a few—to relieve himself.
That's his way of telling the squirrels that he is the rightful owner of this land, and they'd better stay away. Yes, he's lord and master of all he surveys, and other critters enter the yard at their risk.
Satisfied, he returns to the patio and settles onto the bench for a stint of guard duty. By this time, my coffee has finished making so I pour a cup and sit beside him while I complete the process of waking up. 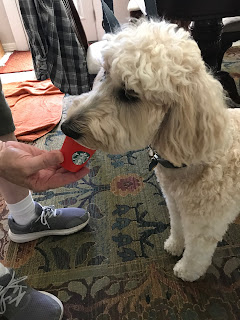 Although Freddie doesn't drink coffee (bad for doggies), he does love to visit Starbucks where the drive-thru barista always gives him a Starbucks Pup Cup.

Since the Pup Cup is piled high with slightly sweetened whip cream, we ration it, allowing him to have only a little at a time. When the cup is empty, he'd eat the cup if we allowed!

For some reason, he has this fetish for paper and paper products. When he was little, he could empty an entire large box of Kleenes. That was funny.

But then he tried to eat the tissues too. Not so funny.

Yes, Freddie is a genius dog. He has a toy where he has to open little gates or doors to find a treat. On some of these doors, a cover has to be slid across to get to the treat. There are 12 of these challenges.

We thought this would occupy his attention for at least 15 or more minutes. Nope. In less than 5 minutes, he had them all figured out. 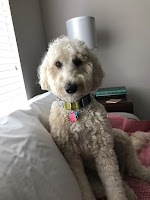 His favorite people /animal watching spot is on the media room couch. He likes that position so much, I finally covered the couch with a sheet.

He can rest his head on the back cushions and look at everything that moves on the street.

When Freddie is in residence, I get very little writing done which is why this post is going up now instead of being written yesterday to schedule in the wee hours of this morning as I usually do.

Freddie is a delight, but having him around is like having an inquisitive, smart little toddler. Like many pet lovers, we talk to him as if he's a person. 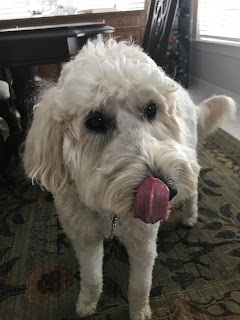 His favorite place in the house is the kitchen because that's where all the good smells come from when food is cooking.
He makes us laugh, makes us walk more which is a good thing, and generally entertains us with his antics.
He's affectionate, funny, intelligent, and delightful. In other words, he's a dog, a human's best friend for thousands of years.
Takeaway Truth
I told Freddie to blow the readers a kiss, and  he obediently blew a version of a doggie kiss. Have a happy weekend.