In addition to celebrating the independence of the United States of America, we celebrate another occasion.

One year ago a neighbor called our youngest daughter to ask her to please come get a dog off her front porch. You have to understand that our daughter has a way with animals that borders on magical. When she went to the neighbor’s home, she found a toy poodle mix in a corner, shaking from fear. Fireworks were going off within hearing distance in spite of a light rain.  She took the dog home with her.

When she told me about Baxter (yes, she’d named him), I said I wanted him. She took him to the vet before she let him around her animals. Baxter did not have a chip, but was healthy. The vet estimated he was just over a year old. 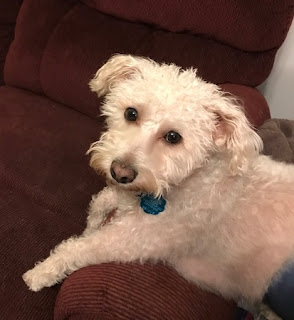 He was not well behaved, in that he barked/bayed at inappropriate times. Each of the dogs we’ve had over the years has been a rescue, but each has already been housebroken and fairly well-trained. We were at a loss with Baxter. Our solution was to sign him up for a training class at PetsMart.

He was expelled because he bayed at the other dogs trying to play with them. Can you imagine how embarrassed we were? The trainer scheduled us for private lessons. They helped. Baxter loved them, I think because of all the special treats the trainer gave him.

Here we are a year later. Baxter is still rambunctious, mostly due to the breed part of him that is not toy poodle. He never tires of playing fetch—we do. Baxter is a good companion and sleeps on our bed with us and our two cats. Good thing we have a king-sized bed, right?

Hero gets up first each morning, but Baxter waits on our bed until I get up. Then he rushes to sit by Hero's chair. Baxter is a sweet and loving boy. I'm glad we have him in our family.

Help us celebrate a year with Baxter as well as Independence Day weekend.

Have you rescued animals?

Posted by Caroline Clemmons at 8:52 AM