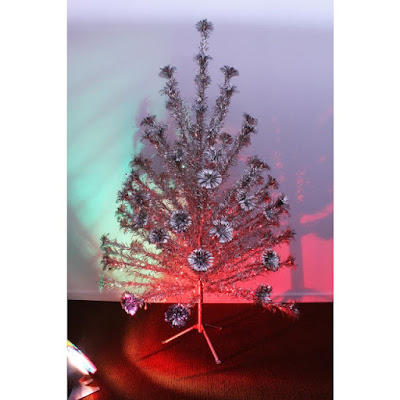 The Christmas tree of my childhood was a small scraggly silver aluminum tree with a color lamp. I am really not as old as that trend, but my parents threw nothing away. I thought it was beautiful and wish I had it now. 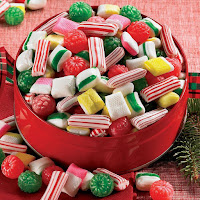 There was always a tin of hard candy or cookies to go with the tree. Heaven forbid you grabbed the wrong tin. You might end up with a box or buttons or sewing supplies- although I would love that now.

Christmas as a child was wonderful and guaranteed a houseful of relatives with quilt pallets on floors, three and four kids in a bed and pulling out that terrible sofa sleeper. We had a large family, so there were lots of kids near my age to play with. 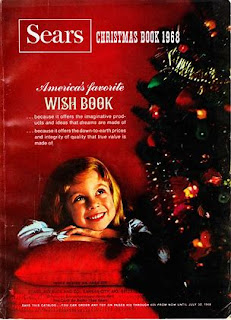 I prepared for the season months ahead by looking through the Sears Christmas Catalog and circling what I wanted Santa to bring. I swear, I wore that catalog out every year and now that I think about it, don’t think I ever got a darn thing out of it. I wonder if it is too late to complain?
Later, when I had children of my own, I went overboard on Christmas. We had yours, mine and ours children- two boys of the same age and a girl. I remember one Christmas when the boys were about 10 and we had to go to a Christmas party. They were a meddlesome duo, and I knew they would look for their presents while we were away. We had a coat closet at the end of the hall and I wrapped yarn like a spider web covering the door and added bells to the string. I had tacks and tape and all sorts of stuff.

I told the boys that if anyone got into that closet, I would know and there would be no Christmas presents. When I got home, I learned that they had spent most of their time trying to figure out how to get past the string to see what was in the closet.

What was in the closet? Nothing- all the gifts were out in the storage building, but they were so busy trying to get into the closet, they looked nowhere else.

On Christmas eve, we would go look at Christmas lights. When everyone was in the car, I would always find a reason to go back in the house…. I left the oven on… I think I heard the phone ring… any excuse would do. Once I was in the house, I would go to the hiding spot for that year, grab the trash bags and dump the wrapped gifts under the tree. After about 6 years, I was pretty quick and could get outside before the kids got restless waiting for me.

I would then go to the car, trying not to be out of breath from my Santa spree, and we would drive on to look at lights. After about 30 minutes or an hour, we walked back in the house and Wa! La! Santa came while we were away.

Not to brag, but this deception... uh process...  was so smooth that my daughter believed in Santa until she was nearly 12.

My daughter still carries on part of this tradition with her children now, wrapping in special Santa paper.

May you all have a blessed and peaceful Christmas!

I would love to hear your favorite Christmas stories.