Who was Duncan Hines? By Sherri Easley

I am always fascinated with the random information I come across while researching a book.

So, my character, Emma, is going on a road trip from Nashville to New York in 1942. I was looking for restaurants for that time period in the vicinity of Bowling Green, Kentucky. It is hard to visualize that area with no interstate highways and only a few chain restaurants. Travelers would have had to eat at local restaurants and diners. What did my research come up with? 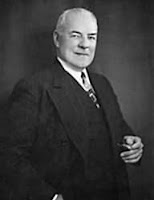 We all have the cookbook and buy the cake mixes- but who was Duncan Hines and why is he known for food?

The following is what Wiki has to say:

Duncan Hines worked as a traveling salesman for a Chicago printer and in his travels, ate many meals on the road across the United States. Hines and his wife Florence began assembling a list of several hundred good restaurants around the country to give to their friends. This was around 1935 when he was 55 years old. That year, they slipped this list inside the Christmas cards they sent to friends.

The list was a hit. The next year his list had grown to 475 suggestions, so he put it in book form, calling it Adventures in Good Eating. By 1946, the book had gone through 30 printings and had become the restaurant bible of the American traveling public. 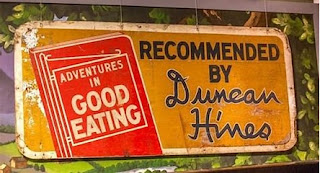 The book proved so successful that Hines wrote another book on recommended lodging. In the late 1940s and early 1950s, Hines wrote a food column Adventures in Good Eating at Home, which appeared in newspapers across the US every Sunday, Tuesday, and Thursday. The column featured restaurant recipes he had collected during his travels, now adapted for home cooking.

In 1952, Duncan Hines bread was introduced through the Durkee's Bakery Company of Homer, New York. This was Duncan Hines' first foray into baked goods.

By 1953, Hines sold the right to use his name and the title of his book to Roy H. Park to form Hines-Park Foods, which licensed the name to several food-related businesses. The cake mix license was sold to Nebraska Consolidated Mills in Omaha, Nebraska, which developed and sold the first Duncan Hines cake mixes. 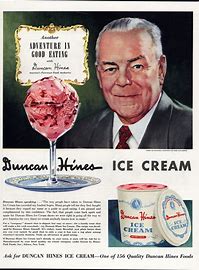 In 1957, Nebraska Consolidated Mills sold the cake mix business to Procter & Gamble. The company expanded the business to the national market and added a series of related products. 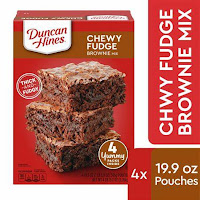 The Duncan Hines brand is now owned by Conagra Brands, which was formerly Consolidated Mills where it originated.

Conagra reacquired the brand through its acquisition of Pinnacle Foods in 2018, which had bought it from Procter & Gamble in 1997.