Today was a work holiday for me, so as most days off- I cleaned house. On Sunday, I had a small mishap- I put too many potato peels down the garbage disposal, resulting in a minor plumbing disaster. I unstopped the pipes and put them all back together, but I had small pieces of potato peels everywhere like my sink threw up so there was a lot to clean up.

I can’t believe we are halfway through the year… and my book still isn’t finished. It is very close- just a few loose ends, but something still isn’t just right. Hopefully, this month…

I have really enjoyed writing this book and the research that went along with it. As with my other book, A Love to Call My Own, this book has recollections from growing up in a different day and time. Even though I grew up in the sixties, the area where I lived was like a land forgotten.

Growing up, we had a neighbor who cut hair. His name was Willie Martin and even in the sixties, he charged only two bits for a haircut. That is when I learned how much two bits actually was worth. Mr. Martin also sold watermelons and always seemed to have plenty of kittens to play with while I waited for my daddy and brother to ‘get their ears lowered’ as my daddy called it.

I was blessed with such bold and memorable people in my life. I think much of my recollection was because there were no other kids to play with, so I spent a lot of time with adults.

So, while I am still deciding where fate is going to carry Emma June, here is a little teaser from the book Stars at Night- hopefully out this summer. 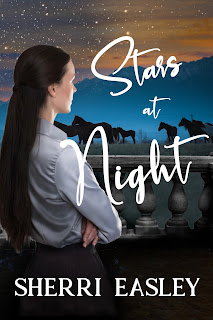 When Emma Daniels woke on this sultry September morning in 1942, leaving town by noon never entered her mind. If it had, she would have dressed better and packed some of her belongings, at least fresh underwear, and a change of clothes.

Rubbing the ragged hem of her yellow flour sack dress between her fingers, she noted that buying new clothes must be first on her list when she reached her destination.

Like most Saturdays, Emma had ridden the five miles into town with her papa in his old farm truck. Papa was going to see Mr. Martin to ‘get his ears lowered’. Willie Martin had a barber’s chair in the back of Haney’s store and for two bits you got a haircut, a shave and all the news from three counties. Most of the men who gathered couldn’t afford the haircut and shave, but came just the same to hear the news and tall tales.

Papa was notorious for his outlandish yarns and vivid exaggerations. However, everyone knew they were all in fun and would cheer him on. Emma and Grace often giggled about the notion that women folk gossiped, but more juicy stories, legends and tall tales came out of that back room than any women’s gatherings either had attended.