SUMMER IS SLIPPING BY

QUESTION: What do you call a snowman in July?

As I sit here, I realize our hot summer days are gliding by, or in some instances melting away, as we inch toward autumn. If you’re a list maker like I am—if only in your mind counts, too—you realize completing your summer chores and your big hope for writing that blockbuster novel are fading away in your rear view mirror. I’m kidding when I say, blockbuster novel. Insert: Even finishing five chapters of a work in progress.

This year, I took the rights back to one of my western romances, Under Starry Skies. I had no clue how much time and energy is involved trying to get it formatted and republished in digital and print form. Add trying to secure a more colorful and relevant cover and the days seemed to spin out of control. I lived, ate, and slept with “Under Starry Skies,” instead of enjoying being under them, lazing about on my patio during the balmy evenings.

As I reflect on the all the work, I wonder whether readers truly understand all the effort involved with writing and publishing a novel. It’s so much more than creating and writing the story. It’s the behind the scenes tasks: editing, formatting, and collecting inside materials that preface or conclude your work. It’s pounding the keys on social media. It’s advertising. It’s pricing to entice readers. 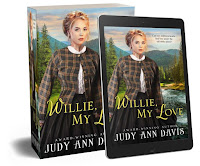 So as I slog through my many tasks, I do have a bright ray of sunshine. My historical novel,  Willie,My Love, placed as a finalist in the 2021 NEST awards (National Excellence in Story Telling Contest). It had earlier won a Book Excellence Award.

I’ll close with the blurb of my latest republished western romance in digital version—with the hopes that I just might view the real stars in Central Pennsylvania sometime after I finish the print version.

BLURB for Under Starry Skies:


Hired as the town’s school teacher, Maria O’Donnell and her sister Abigail arrive in the Colorado Territory in 1875, only to find the uncle they were to stay with has been murdered.

Rancher Tye Ashmore is content with life until he meets quiet and beautiful Maria. He falls in love at first sight, but her reluctance to jeopardize her teaching position by accepting his marriage proposal only makes him more determined to make her part of his life.

When their lives are threatened by gunshots and a gunnysack of dangerous wildlife, Tye believes he in the crosshairs of an unknown enemy. Not until Maria receives written threats urging her to leave does she realize she is the target instead of the handsome rancher.

With the help of Tye, Abigail, and a wily Indian called Two Bears, Maria works to uncover her uncle’s killer and put aside her fears. But will she discover happiness and true love under Colorado’s starry skies?