A Love To Call My Own ~ Sherri Easley

As I grow older, I am constantly amazed how fast the time flies. Here it is June already.

I have been working hard on my second book and  hope to have out in July- Stars At Night- a sequel to the first one A Love To Call My Own.

Over the last few months, I have written a lot about the settings and events I used in my first book.

It is set in the bottomland of Northeast Texas in 1942. I have based several incidents in the book on stories told by my mother such as being teased for wearing clothes from the WPA Relief effort, hog killing and a few funny incidents that only my Grandpa could pull off.

I thought I would reintroduce Grace - in A Love To Call My Own. 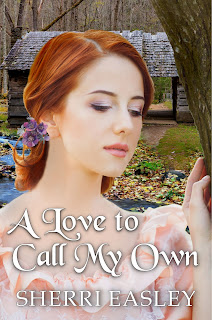 It was a brutal awakening for the sisters when they moved to the dilapidated shack in the woods. Grace bit the inside of her lip as she thought about the events that brought them there.

They were living with Aunt Nora when Papa got out of the pen. Mama said the only way she would go back to him was if he had a house and a car.

Aunt Nora laughed and told her, “Shorty Daniels will never have two dimes to rub together.”

When Papa returned a week later in a shiny used truck and told her he had a house, Mama was ecstatic and sneered at her sister. They piled their belongings into the back of the truck and headed out, with Papa at the wheel.

Mama was wearing her best dress with high heels and a big ole smile on her face as she waved goodbye to Aunt Nora. All along the way, she was humming and singing as Papa held her hand. When Papa turned the truck onto the muddy road leading to White Oak bottom, Mama’s smile faded, and she became quiet.

When they stopped in front of the house, part of the roof was missing, and the porch was caving in. Grace stood on the bed of the truck to see if there were neighbors. Looking in every direction, all she saw were trees. The neighbors would come later.

As Mama stepped from the truck in disbelief, one of her heels sunk into the soft red clay. Tears rolled down her face as she pulled the shoe from the muck and limped across the yard, wearing only one shoe, to sit on the porch. Mama could have returned to the comfort of her sister’s home that day, but pride would not let her, so they stayed. That was eight years ago.

I would love for you to check it out and let me know what you think!