My latest novella, Huckleberry Happiness, is being released today. It’s the historical story of a young woman, Emelia Stone, who runs a bakery and her best friend from childhood, Joe Sawicki, who owns an ice company with his brother. Amelia bakes pies from native Pennsylvania huckleberries and buys ice from Sawicki Ice Company. She wants to make a special huckleberry ice cream to enter in the Pennsylvania Railroad’s dessert contest.

The various species of huckleberries range in color from bright red to dark purple to blue. The purple and blue huckleberries taste sweeter. In addition to humans, many animals enjoy huckleberries, including bears, red foxes, opossum, skunks, squirrels, chipmunks and white-footed mice.

Huckleberry bushes are native to Pennsylvania and stay green all year. A patch, discovered near Losh Run, north of Harrisburg, has two plants that botanists determine are 13,000 years old, older than the Sequoia trees of the West. The gigantic patch sprang from the same plant thousands of years ago as the ice cover was melting.

Because huckleberries are small, the word “huckleberry" was often used as a nickname for something small, unimportant, or insignificant. Scholars believe this was the meaning Mark Twain had in mind when he named his Huckleberry Finn character. People at that time would have understood that “Huck" Finn's name was a clue that he was a small boy who was of a lower class than his companion, Tom Sawyer.


Emelia jabbed furiously at the mixture inside the bowl with her pastry cutter. How could her very own sister abandon her without an ounce of misgiving? Couldn’t she have waited until the end of the month and, at the very least, earned her pay before leaving the bakery?


Joe watched her work, his hands shoved in his pockets. “Are you trying to kill the lard…or is it the flour that has you so riled?” He peered over the rim of the bowl.


“Be careful,” she shot back and gave him a lethal glare that would stop a rattlesnake from making a fuss. “This place is armed with sharp knives.” 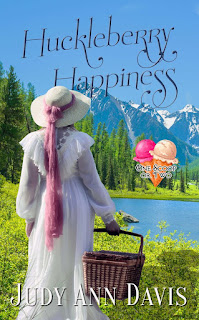