Thankful I can Help by Paty Jager

In November everyone starts thinking about all the things they are thankful for. I have a whole list, but one of the things I am thankful for is the ability to help others through my writing. 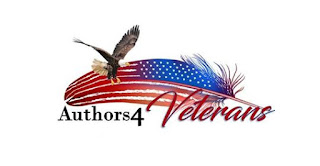 November 11th, Patti Fiala and Stacey Joy Netzel took 20+ bags of books, socks, toiletries, everyday essentials to the Fisher House For veterans families. It's a place where families stay while their military family member is being cared for. We do this twice a year. Around Memorial Day and at Veteran's Day.  We send Patti and Stacey toiletries, books, coloring books, socks, scarfs, mittens, fun things. This time I sent coloring books and crayons, adult coloring books and coloring pencils, cozy socks, and chapstick. All of this I watch for all year and buy items I see on sale or clearance. Because I think ahead, I'm able to supply more items. These two generous authors put the bags together and take them to Fisher House. Here is my bag they put together to go to some one on Veterans Day. 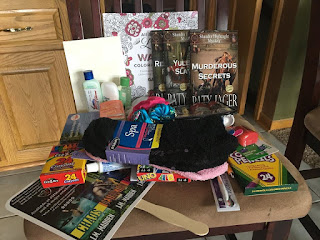 They also hold back a book or swag from each author that goes into three bags we raffle off after the bags have been delivered. The people who enter the raffle sign up for one of our social media sites. It's a win-win all the way around. If you'd like to learn more here is the link:  http://authors4veterans.com/participating-authors/

The other event that I'm thankful I was able to participate in is the Wild Deadwood Reads Anthology. This book has 17 short stories by 17 best selling and award winning authors. All the stories are set in Deadwood. Some historical, some contemporary, there are a few ghosts and one time travel. They are all great stories and all the proceeds go to the Western Sports Foundation. This is an organization that helps Rodeo athletes when they are injured or experience a set back that keeps them from being able to make a living at what they do for a living. If they are injured to where they can no longer rodeo, it helps them transition into another way to make a living, through schooling or training. It is more than handing them money, it is helping them make life changes.

The bad news about the Anthology is it will no longer be available after December. but the good news or you, is the ebook version is on sale for $0.99 until November 15th. If you haven't purchased your copy, now is a good time to do it.  It is also available in print.

Paty Jager is an award-winning author of 35 novels, 8 novellas, and numerous anthologies of murder mystery and western romance. All her work has Western or Native American elements in them along with hints of humor and engaging characters. Her Shandra Higheagle mystery series has been a runner-up in the RONE Award Mystery category, and a finalist in the Daphne du Maurier. This is what Mysteries Etc says about her Shandra Higheagle mystery series: “Mystery, romance, small town, and Native American heritage combine to make a compelling read.”