White Noise and My Writing Process

I have this 'thing'... called Tinnitus

Tinnitus (TIN-ih-tus) is the perception of noise or ringing in the ears. A common problem, tinnitus affects about 1 in 5 people. Tinnitus isn't a condition itself — it's a symptom of an underlying condition, such as age-related hearing loss, ear injury or a circulatory system disorder.

It started when I had Bells' Palsy about two years ago. The right side of my face went numb the day after Thanksgiving and for weeks I had to deal with a mumbling and taping my eye shut at night and all kinds of other fun things, but it left me with an inner ear injury that affects my balance and gives me this high frequency humming in my ears.

So in my house writing time is anything but quiet. I can't have it silence because that 'sound' in my ears makes me a little crazy, like a cricket who won't stop 'cricking,' or a dog down the street that won't stop barking.

So when I write, I need background noise. I all it White Noise, although I'm likely misusing the term.

How do I work with it? It's a bit of a balancing act. I need enough noise to stop the irritation, but not 'too much' that I can't think. Or something that won't draw my attention from my writing. It doesn't always work. It's a process in process.

When I'm writing a new story or drafting some kind of idea for a story, I like to have on the 'oldies.' This means either movies or television shows that I know, really well. So well that I'm likely to know what's about to happen before it happens. That (for the most part) keeps my focus on the writing.

Sometimes, I can't help myself. I have to look for 'that scene' or stop to recite 'that line.'  And it's not that the show has to match the Romance Sub Genre that I'm writing in. It probably helps when it isn't, so I'm not using the mood of the show.

I used to try to listen to music like a sound track, but for some reason it doesn't work for me anymore.  Go figure, right?
But I guess you can see the images that I'm posting and know that those are a few of my favorites to write to (have it on a separate screen connected to my computer). 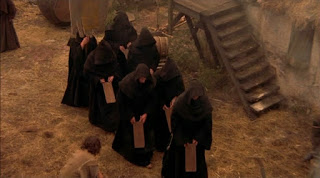 Then, when the first draft is done and the comments from my beta readers added in, it's time to edit.
And then the fun really starts.
I've always said I'm a bit of a masochist. I mean, what dancer isn't. Bleeding blisters and aching muscles aren't for the weak of heart, right? So it shouldn't be surprising that my editing self is a bit like the monks from 'Search for the Holy Grail' who whack themselves on the head with boards.
I know, it's a little extreme, but it's me to a T.
So what show is my go to background noise for editing?
Well, I'm so glad you asked! 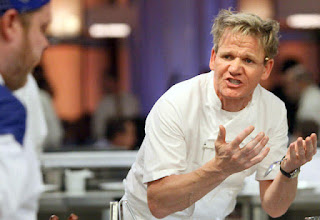 Hearing the dulcet tones of Gordon Ramsey reaming one of his contestants or a wayward restaurant owner... well, maybe it feels like I'm not alone in the trenches.

And don't forget Kitchen Nightmares! Some have commented on the 'curse' of the show that a number of the restaurants that he tries to save go under anyway. I think I know why... because editing can HURT. It doesn't have to, but that's kind of up to the writer. If I turn a blind eye to the issues, let them ramble on or wallow in themselves, then it makes it so much harder to get a finished project that I get excited to share with others.
The best thing to do is 'listen.' 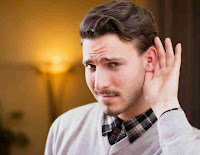 Listen to your betas, your review partners, etc. You don't have to accept everything, but you have to listen. Sticking my fingers in my ears and saying blah-blah-blah, I can't hear you... isn't going to help me, or the story.
So I guess I'm looking for some fellow 'sufferers' to share the pain with... so I visit Hell and Nightmares for those moments of editing.

So, tell me... what kinds of 'white noise' do you use when you're creating?