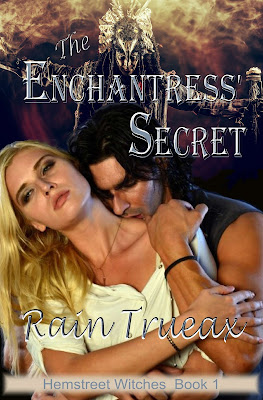 My new series is contemporary paranormal. These books are where writers create a whole new world or change the existing one to enable magic. It's rather fun to write stories with that kind of power. I opted, as I had with Diablo Canyon and Sky Daughter, to have the Hemstreet witches' world look normal if it wasn't for magic.

When writing about magic, the writer must consider its source. Magical powers can be given by a god (could be deity or demon). In Harry Potter, magical ability is born into some but must be developed-- hence a school. Magic in the Potter world uses objects (also popular in time travel), such as broomsticks, invisibility cloaks, wands that work only for their own masters.

The Hemstreet witches are born into what seems a natural world but with abilities inherited from shamans and witches. Their skills are nurtured and guided within the family, which is currently made up of four sisters, their widowed mother, two grandmothers, and a disapproving aunt. They are human, with a normal lifespan. They can be killed. They experience normal, human emotions like arguing, jealousy, joy, love, etc. They are supportive of each other. One rule that may not be broken-- they must use magic for the good of others or self-defense. Any selfish use or for evil will find them losing power or even punished.

They can all throw fire or energy bolts, dematerialize and travel from one place to another seemingly at an instant. Their other gifts vary where some are better at one thing or another like healing, seeing into the future, reading minds and histories, creating doppelgangers, and shifting into animals. They face demons, black magic purveyors, sorcerers, shapeshifters, druids, the occasional monster who was conjured into existence for nefarious purposes, and are helped by spirit guides, angels and supportive ghosts.  In their world, some animals can talk and are attached to their person. There are elementals, wards, potions, and vortexes.

Because I only write romances, in each of the books, one of the women will meet her mate with all the usual complications. Together this couple will face danger from human and demonic sources.


In Enchantress' Secret, Denali Hemstreet, as a detective in the family agency, uses her skills, both natural and developed to solve crimes. Ex-SEAL, Nick Beringer paints with an intensity few can match, including images he does not understand. An idealistic witch and a hardened soldier find their mutual attraction urges them to overcome their differences to join forces, when another realm thrusts past their boundaries and challenges their lives.

Hemstreet Witches Book 1 is set in Barrio Viejo, Tucson Arizona, a piece of the old Presidio where the witches watch the street and keep the order of the ‘old ways’. (second book, To Speak of Things Unseen, will be out the end of July).

Available at:
Amazon for Kindle and Paperback