’ve been a natural night owl my whole life. My best work seemed to come around sunset and into the starry nights. All of my reports and papers in college were done in the late evenings into early mornings. Not because they were due the next day, but that’s when my brain focused best.
Into my early twenties, the trend continued. My evenings wouldn’t start until after my shift at work ended (waitress at a steakhouse). Which meant 11pm and often later. Thankfully, my boyfriend at the time (now my husband) shared the same schedule as a waiter. An exhausting schedule, but I seemed to thrive in it. Fast forward a few years… things are different.
I had children.
(Insert snort or laughter here)
The schedule is ridiculously different.
I have a hard time staying up past 8:30pm. And I’m only up that late to get the kids’ stuff ready for 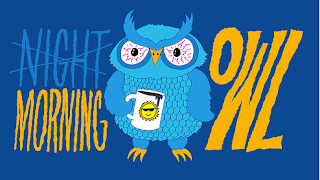 school the next day. I’d crash even earlier if I could. Something about little children just sucks all the energy out of you. Probably because my two little angels have absorbed all my energy during pregnancy, and now flaunt it in front of me like dangling a bouquet of chocolate roses in front of a diabetic. A particularly cruel torment.

Because these two beautiful boys are up at 5:45am every morning. No matter how late they went to sleep the night before. Another particularly cruel torment for someone who was never a morning person.
Which means I’ve had to force my creative brain to function during the day. My muse protested heavily for years. But she seems to have come around. Or at least passed her duties on to a more daylight-friendly muse who has taken pity on me. J


What’s your schedule like? Are you a morning person, or a night owl? Or are you like me: a former night owl with permanent exhaustion?

Susan Sheehey writes romantic suspense and contemporary romance. Her latest novel, Jewel of Solana is available in ebook from most e-retailers, as well as paperback from Amazon, published with the Wild Rose Press. It's the second in the Royals of Solana romantic suspense trilogy. Susan is a strong advocate for Autism Awareness, and includes the healing element of water in every story. She lives and laughs in Texas with her husband and two boys. Follow Susan on Facebook, Twitter, and her website www.SusanSheehey.com
Posted by SusieSheehey at 7:00 AM