Bound for the Hills

For me, writing a series has been interesting in that it doesn't always begin with my knowing there will be one. Bound for the Hills is a good example. I knew there would be three Taggert books only when I wrote Echoes from the Past. When I wrote the first Arizona Historical Romance, I had no idea there'd even be two. Each grew out of secondary characters whose story interested me.

At just over 110,000 words, this book ended up considerably longer than I had in mind also, but that's the way writing goes. The story is where Cole Taggert finds his own love and nearly loses his life. It will not be the last of the Arizona historicals but the next will be next fall probably and follows a secondary character from this book-- of course ;). 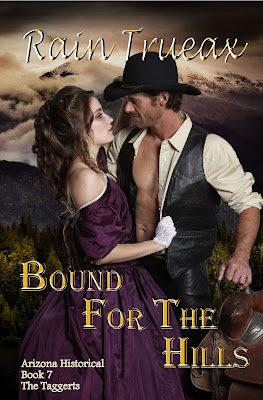 ><><
Blurb for Bound for the Hills:
Needing new inspiration, answers to a mystery, and healing from the death of her father, English professor, Wilhelmina Butler heads for the high country of Arizona and a small log cabin. In the Mazatzals, Willy hopes to write the great American novel, something she can be proud of unlike the very successful dime novels she has been publishing under a pseudonym. The lake cabin will give her all she could dream and a lot more.

Asked by his worried sister-in-law, Holly, to check on her college friend, Cole Taggert assumes her friend is a naive idiot to head into the wilderness with little idea how to survive its dangers. Then he sees her swimming in the lake, and Willy’s life isn’t the only one about to get redirected.

Bound for the Hills travels from the Mazatzals to Tucson and explores not only the land but the human heart. It brings together the Taggert brothers as they face a deadly enemy, and their women work to build the kind of life where their children can grow up safer than their fathers did.
Spicy with some violence and strong language, Bound for the Hills is the seventh Arizona historical, a love story for the third Taggert brother.

Trailer: https://youtu.be/SzytwKPgJ9o
Available at Amazon on sale until April 1: http://www.amazon.com/Bound-For-The-Hills-Historicals-ebook/dp/B01D7L0IL4
All other sites: https://www.draft2digital.com/book/157077
Paperback when CreateSpace gets it ready later this week
Posted by Rain Trueax at 1:00 AM