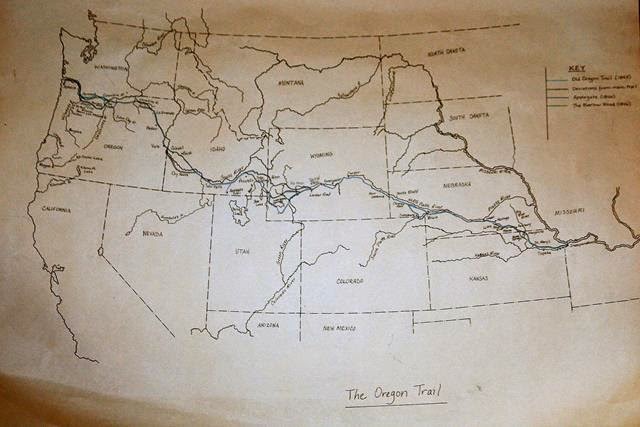 map drawn by my daughter when she was at Oregon State

There are certain historic events that take on mythic qualities. In America, some of those have had lasting consequences, others not so much: Boston Tea Party; Revolutionary War; Lewis and Clark Expedition; Indian Battles; Pony Express; Building of the Railroads; Civil War; and on any list, the westward migration across the American continent.

When the United States government wanted to consolidate its power over this nation, the answer was to give away land. One such act was the Donation Land Claim Act of 1850:

"Arguably the most generous federal land sale to the public in American history, the law legitimized the 640-acre claims provided in 1843 under the Provisional Government, with the proviso that white male citizens were entitled to 320 acres and their wives were eligible for 320 acres. For citizens arriving after 1850, the acreage limitation was halved, so a married couple could receive a total of 320 acres. To gain legal title to property, claimants had to reside and make improvements on the land for four years."

"The Donation Land Law was significant in shaping the course of Oregon history. By the time the law expired in 1855, approximately 30,000 white immigrants had entered Oregon Territory, with some 7,000 individuals making claims to 2.5 million acres of land. The overwhelming majority of the claims were west of the Cascade Mountains. Oregon’s population increased from 11,873 in 1850 to some 60,000 by 1860." William G. Robbins in Oregon Encyclopedia

These giveaways attracted people from all walks of life. Mostly they were neither unusually rich nor poor. I’ve read it cost around $1000 to acquire all needed to make the 2200 mile journey from Independence, Missouri to the Willamette Valley. For a family of four, that meant wagon, clothing, tent, bedding, livestock, 600 pounds of flour, 400 pounds of bacon (packed in barrels of bran), 100 pounds of sugar, 60 pounds of coffee and 200 pounds of lard. Add to that sacks of bean, rice, dried fruit, salt, vinegar and molasses. Eggs packed into cornmeal were then used to make bread. 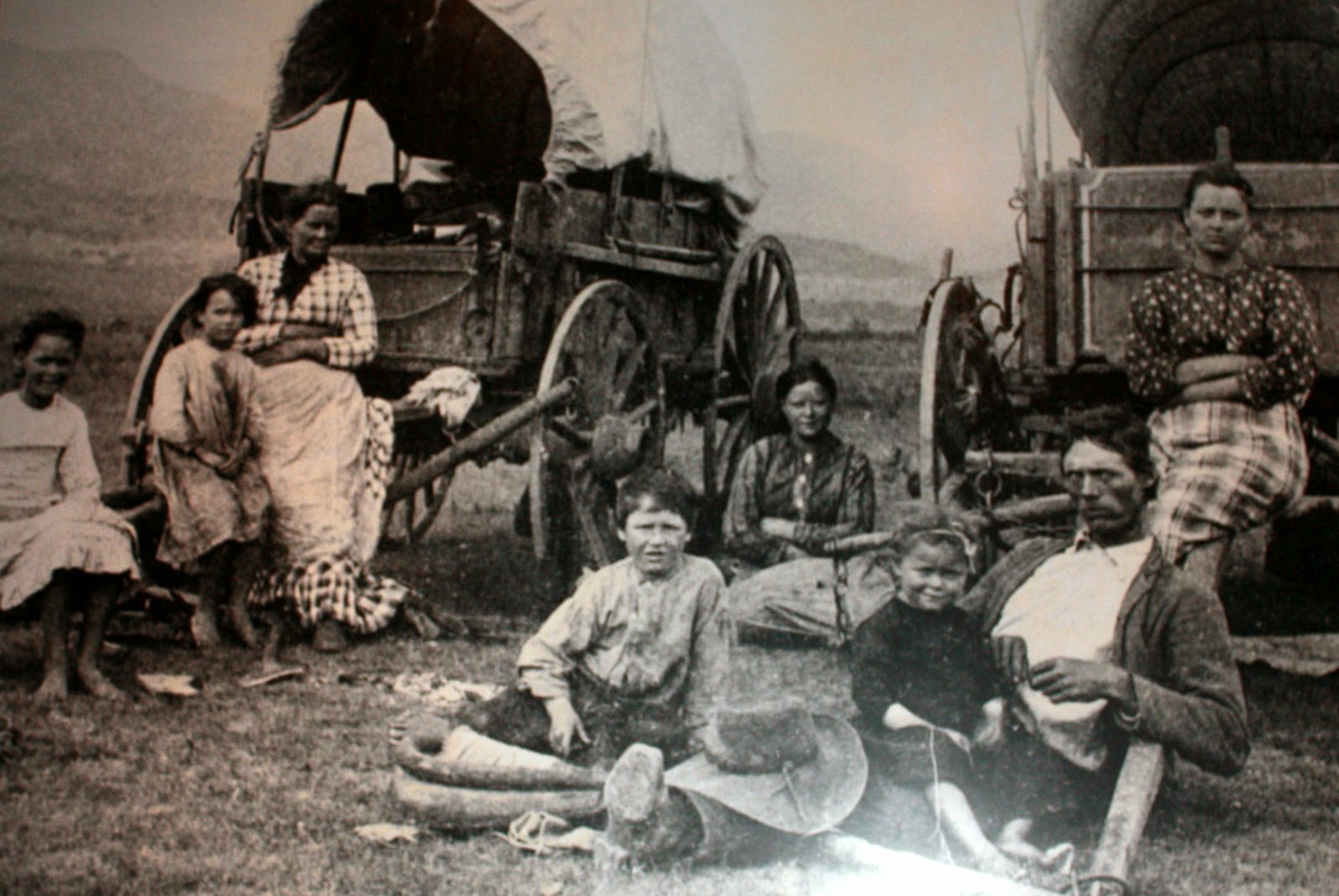 If they brought a milk cow, butter was made by putting the morning's milk in buckets that churned it during the day’s travel (which illustrates how enjoyable riding in that wagon would be). They waited for the grass to green up in the spring and then hoped to beat the snows before they went over the last mountain ranges. The road west was littered with graves, which for the Oregon Trail wasn’t so much from Indian attacks as cholera and accidents.

Fortunately, for our understanding what they went through, some of the pioneers kept journals. We can read past the cold facts of the journey, to their own words, which tell of the sacrifices and difficulties they faced for the hope of a better life in Oregon.

“Then cholera took my oldest boy. His sister Isabel fell beneath the wagon And was crushed beneath the wheels.” from Overland 1852

“The children and myself are shivering round and in the wagons, nothing for fires in these parts, and the weather is very disagreeable.” Amelia Stewart Knight, 1853

“This is the ninth case of death by violence on the route, three of whom were executed, the others were murdered. This route is the greatest one for wrangling, discord and abuse of any other place in the world, I am certain.”   Abigail Scott Duniway

It was into this saga, of hope and loss, sacrifice and danger, struggle and victory, that I set my first Oregon historical romance, Round the Bend. To do all the research required, write the story of an epic journey, and set it into a tumultuous romance, it helped to have a hero and heroine who not only inspired me but always stayed true to their character. 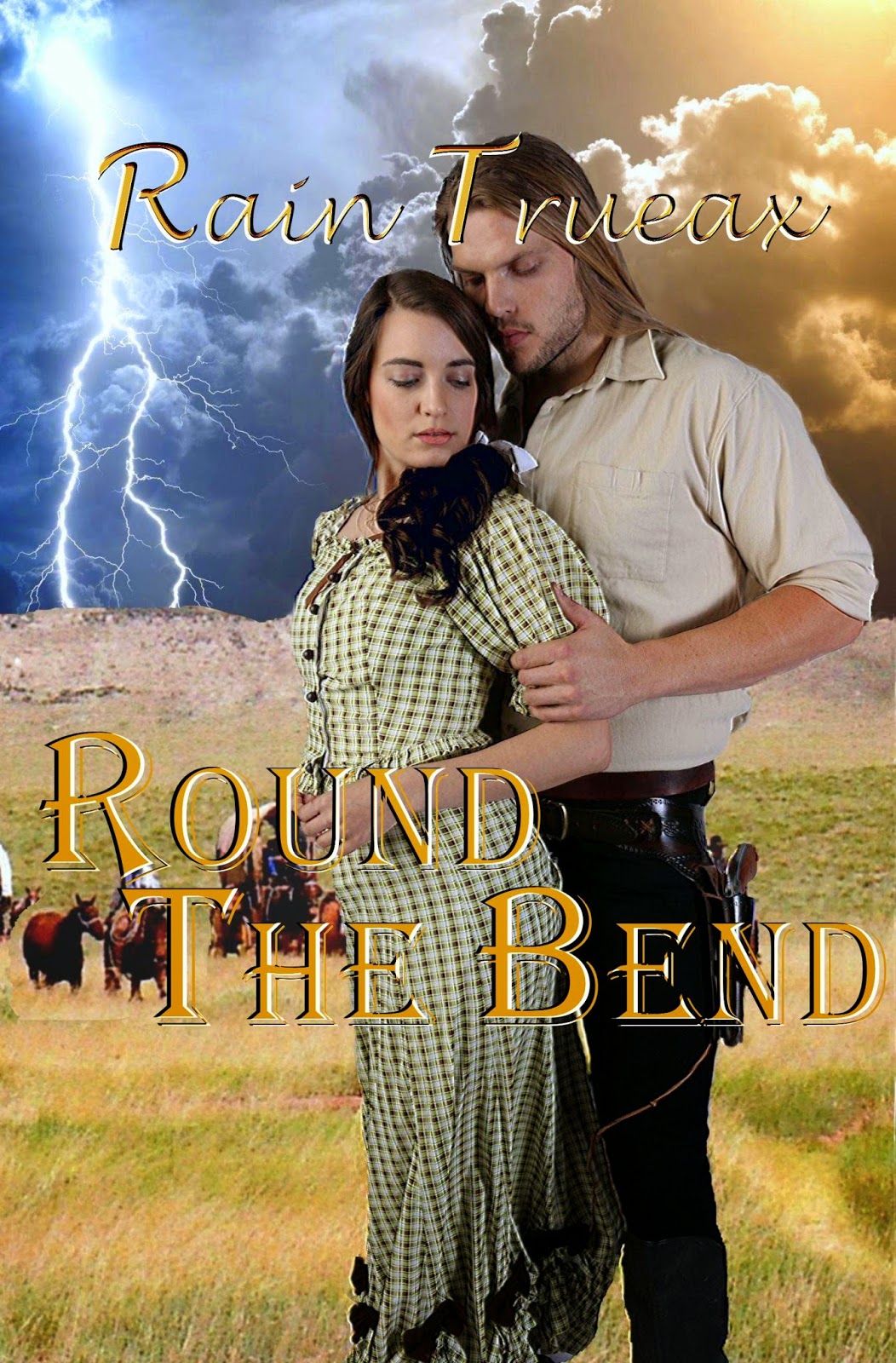 At seventeen, Amelia Stevens, having grown up in a nurturing environment, is full of dreams and the many books she’s read. When her best friend, since childhood, Matthew Kane lets her know he has feelings for her, she pushes him away. He's ruining everything.

At almost twenty-one, Matt has already seen too much of the hard side of life. He holds few illusions about the trip or his own future. His family is as different from hers as darkness to light. Even if Amy changed her mind, it really couldn't work. She deserves someone more like the handsome wagon train's scout, Adam Stone.

Round the Bend, book one in what will be a series of four, tells of the purest of love and the most driven of hate. It is the story of the westward march of pioneers. Most of all, it is the story of how a man’s highest ideals can change his life and that of others. Heat level (with 1 least and 5 most) is ♥♥♥♥.

Buy sites for Round the Bend-- eBook or paperback at:


https://www.draft2digital.com/book/87525
Romances with an Edge