What Genre is This? by Paty Jager

As I write more books, I find myself having a harder time trying to categorize my books. I tend to mix genres or write something that doesn't really fit a specific genre. I can usually determine if they are historical or contemporary. After that, sometimes narrowing the book down to a more specific genre can be a bit of a problem.

Case in point is my latest release. Staking Claim is a sequel to the Halsey Brothers Series. The Halsey Brothers books were historical westerns. Staking Claim starts in Liverpool, England spring of 1899. The characters sail across the Atlantic on a clipper ship and arrive in New York City. From there they travel by train to Chicago where they are helped by Pinkertons. After Chicago they arrive in Sumpter, OR via train. No horses other than Hansom cabs in New York. No gun play. Nothing that makes this a western, yet I feel compelled to categorize it a western because it is part of the Halsey Brothers Series.

Anyone have any thoughts on that?

Here is the cover, blurb, and a short excerpt. 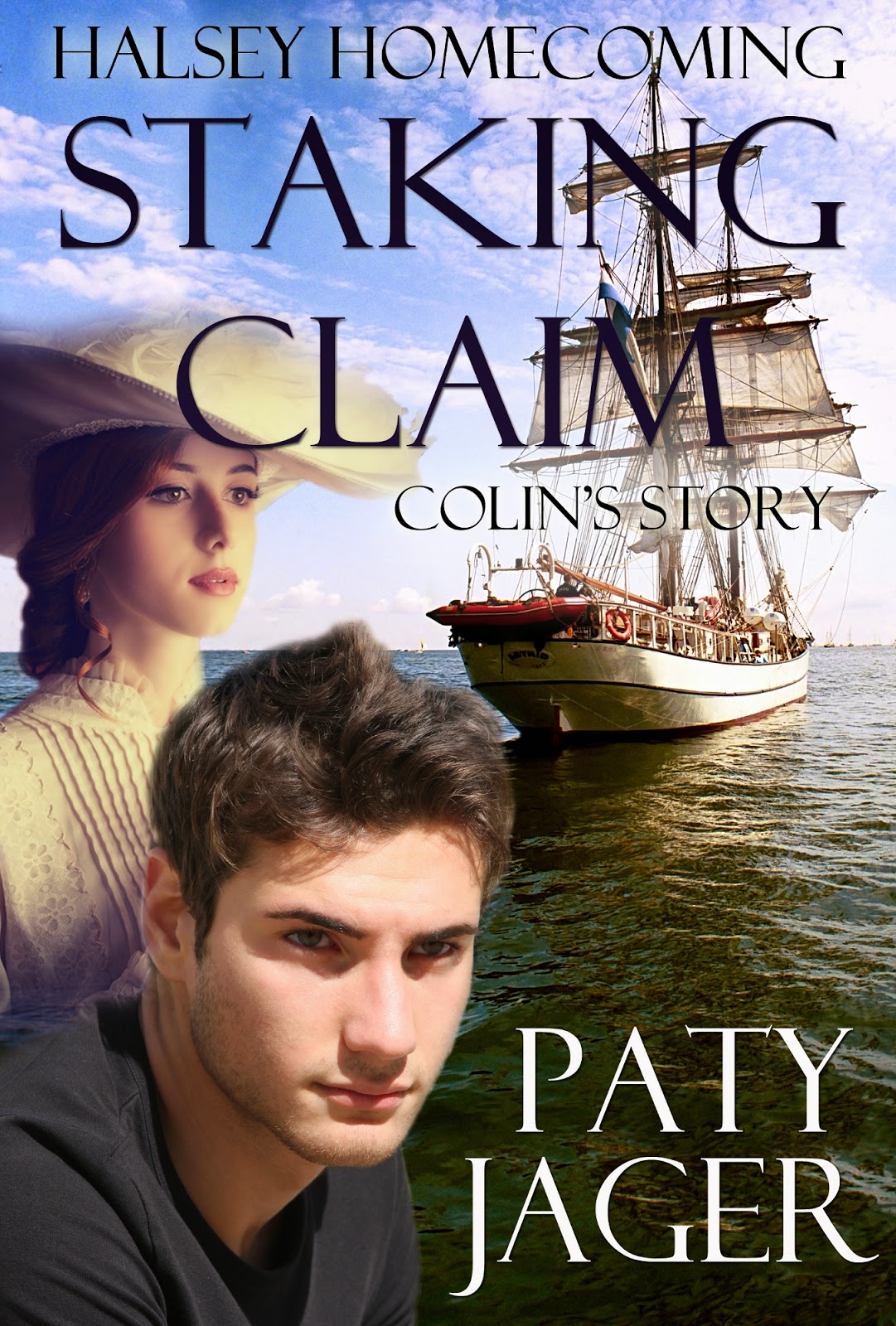 On a ship bound for America, Colin Healy encounters a contradictory woman, whose beauty and grace intrigue him.

Livie Leatherby boards the ship as an imposter to get the information she needs to save her family. Befriending Sir Colin Healy is easy with his chivalrous tendencies. But she soon realizes discovering his past marks him for death.

Forced together to stay one step ahead of the Lord set on killing Colin for his estate, can these two get past the lies and deceit that has brought them together before one or the other meets their demise?

“Welcome!” boomed Captain Whiteside as the young woman stepped from the gangplank onto the vessel.
“Thank you, Captain.” She touched a gloved hand to her hat, then touched her earlobe showing beneath upswept copper-colored hair.
Colin didn’t want to think he was partial to red hair due to his mother’s fiery locks. This woman’s upswept hair was a more subtle hue. He found the shiny copper color mesmerizing.
“Your name?” Captain Whiteside inquired, holding a script with names and cabin numbers.
“Miss Olivia Leatherby.” The woman’s green gaze drifted from the captain to Colin. Her eyes widened, showing she recognized him from earlier. She made no move to thank or acknowledge him, and her gaze quickly returned to the captain.
Why didn’t she at least acknowledge my presence? Colin continued to study the young woman. The more he saw, the more he was intrigued. She was a good head shorter than he, but her curves and the way she set her feet to take the sway of the ship proved she wouldn’t float away in a good breeze.
“Miss Leatherby, you will be staying in first cabin twelve.” Captain Whiteside tooted on his whistle and the cabin boy hurried forward.  “Jack, take Miss Olivia Leatherby to first cabin twelve.”
“Aye, Captain.” The young boy waved his hand for the woman and her belongings to follow.
Cabin twelve. That was two cabins down from Colin. Being practically neighbors, bumping into one another would be unavoidable.
He’d moved back to his spot at the railing when his gaze landed on another passenger whose fashionable attire and haughty manner didn’t fit with the usual sailing passenger. He’d come across a few men like this one since his return to England and taking charge of his estate. Why would a man of this class take a clipper rather than a steamship? He was the type who would think the accommodations on a clipper ship beneath him.
The wind didn’t carry the man’s name to him by the railing as Captain Whiteside greeted the stranger. It didn’t matter. He could always ask the cabin boy or the captain the gentleman’s name.
He turned his attention to the smoke puffing out of the Compania. A dark gray cloud puffed out adding more somber gray to the day. Passengers lined the deck of the steamship, waving at the people on the docks.
He could have been on that ship, surrounded by all the people and traveling in luxury, but he preferred the slower pace of the sailing vessel. He’d used his newly acquired connections in the shipping world to obtain a first cabin on the Americana. While he didn’t need the luxuries one had while on a steam ship, he did prefer traveling on a sailing ship in first class. The rooms were slightly larger, giving enough room to not feel as if he slept in a coffin, and the food, while not being served as elegantly, was filling and tasty.
The quiet, solitude, and time would allow him to go over the ideas his cousin Denis had handed him as he left Meath Hall. Even though he was excited to return to his family in Sumpter, he had become accustomed to riding about the thousand-acre estate talking to the tenants and discussing the best ways for them to grow better crops and livestock. Growing up, all he knew was mining, but living here, overseeing the land, he felt a kinship to both the people and the land.
“I guess you can take the boy out of the country but you can’t take the country out of the boy.” He grinned and headed to the first-class section of the ship. There would be a few more hours of spring sunlight streaming through his port hole. He’d best take advantage of the light to read the ideas Denis submitted.
He entered the covered stairwell and stopped. Angry words flowed up the opening.
“I heard you were late.” The steely deep tone sounded like a threat.
“Ah had to say good-bye…”
He knew that soft wispy voice. Colin hurried down the stairs.

Website: patyjager.net
Blog: Writing into the Sunset
Posted by Paty Jager at 12:01 AM