NEVER LET FACTS GET IN THE WAY OF A GOOD STORY!

By Fleeta Cunningham, Guest Author
I spent a weekend with my daughter and her husband a year or so ago. My son-in-law is a wonderful man who loves my daughter and has been a wise and caring father to my grandchildren. He’s a businessman, with an accounting background, whose life is about balances and the bottom line. My world is in a time zone he doesn’t recognize.
He’s a darling, but he and I have a hard time finding common conversation. On this particular morning, he was making a special effort to comprehend the writer’s life. Hoping to share the excitement I find in my work, I described my day, sitting in a quiet room alone, plotting, creating characters, designing dialog.
His eyes lit with a glimmer of comprehension. “You mean, Mom, you spend hours all day, by yourself, making up places, inventing people to live there, and then talking to them and writing down what they say.”
Delighted with his summation, I agreed. “Yes, that’s exactly what I do. That’s it.”
His brows knitted together, but I caught a glint of humor in his eyes. “You know, Mom, there are places where you can get treatment for that condition.”
I patted his hand. “Yes, I know about them, sweetie. But the people they treat in those places live in fantasyland. I just work there.”
The life of a full-time writer is a little off-beat for the nine-to-five, office-and-home commuter world, I suppose. The rhythm is different. Hours are not just unpredictable, they’re incomprehensible.
Three in the morning? Eighteen hours at the computer? Five hours to write a conversation and you tossed it? And as for colleague conversation? Listen in on a recent coffee-chat between a couple of writers I know:
Pat: My hero won’t talk to me.

Pat: At least he’s telling you he doesn’t love her. Not only is my hero not talking to me. I have a plot knot that won’t come loose. I can’t find a way to hide the body so the heroine doesn’t look like she’s too stupid to live when she rushes back into the house and falls over it.

Meg: But you know where you’re going. I’m wandering all over the place. All that research I did on Chicago in the twenties was a waste of time. I finally had to move the story to California. The city didn’t have the right atmosphere for my Christmas sunrise proposal. Now my whole setting is wrong.

Pat: Oh, no! And you had such a clever opening for that story. I’m having just as much trouble finding the right way to kill my handyman. Nothing can start till I get the murder underway.

Meg: Starting over is so hard. Wish I could find the right way to get this epic of mine rolling. I’ve had those two characters meet five different ways and not one seems right.

Not your normal Monday morning coffee break chatter at the office, is it? And it’s hard to explain that the characters who aren’t “talking”, or plans for the “perfect” murder, or design of the make-believe world are as significant to the writer as the dark headlines, major football losses, and stock market downturns are to the rest of the world. Working in fantasyland has its pitfalls and burdens just like any other workplace. Even if we can do it in our fuzzy jammies and bunny slippers.
People often ask where writers get the ideas for their stories. I have one author friend who began telling people, “Oh, I wait till Walmart has ideas on sale, and I pick them up half price.”
A bit cynical, sure, but the truth is most writers can’t explain where a story idea comes from. Maybe it’s from a conversation half heard in an elevator. Or a news article in the daily paper suggests a possible “what if” scenario. It might be the remnant of a dream. Family stories, stretched by time and filtered through generations, roam through a lot of my tales.

My granddaddy was a cowboy, a real one, not the TV kind, who worked on a ranch up in the Panhandle of Texas before the turn of the twentieth century. I grew up on his stories, and as a result, as Willie Nelson said, my heroes have always been cowboys.
Most of my stories have a little cowboy wisdom sprinkled in and many can be traced back to some of the tales Granddad told me. I have his rope and his black campfire kettle setting by my fireplace where I can reach out and touch them for inspiration. They always work when I find myself in need of a hook to hang a story on.

For the most part, I write about small town life. I’ve lived in small towns all over Texas. I suspect small towns everywhere, whether Texas or Provence, have common threads. In small towns, an incident that would be unworthy of comment in the city can serve as the subject of the sermon in every single church come Sunday morning. The passing of a long-time resident will be noted not just by family and friends but by the community at large.

When my small town was threatened by massive wildfire three years ago, the population became a family. Every loss was personal, every home saved was a victory, and not one person was untouched by the plight of his neighbor. Little things hold people together here, whether it’s the annual city Fourth of July picnic and fireworks, or the Merrill’s son Tom asking Missy, oldest daughter of the Hammonds next door, to be his wife. Tiny dramas make up life and those shared moments give me a great place to start a story. They are closer to me in a small town world.
Once in a while someone will ask if I make up everything I write or do I borrow a little from real life. I have to tell them that I write fiction—every story, every event, every word comes from my own scrambled mind. Not one bit of any scene ever actually happened. But I believe everything in my books is true. That is, it isn’t so far-fetched that it couldn’t have happened. It just didn’t, not anywhere except between the covers of my book.
And then I also have to admit I am constitutionally incapable of retelling any incident straight or exactly the way it happened. I will always see how a conversation could have been more interesting. Or how an incident should have been more dramatic. And what would give a scene a better climax. Even if I’m only telling what happened when the cable guy came to fix my TV reception.
I guess I’ve been cursed/blessed with that trait all my life. My family, early on, recognized that asking me how something happened might result in a good story, but probably it would be a little short on factual information. When accused of “telling stories”, I had to admit I did.
I’m just fortunate that there’s a place in the world for people like me. Somebody who dreams in Technicolor, who always can think of a better way to end an argument two hours after the question is settled, and who fell in love with the sound of words as soon as she could talk. There is a place for somebody like that. On the line after the title, the one that says “Author”. Because some of us never let facts get in the way of telling a good story. 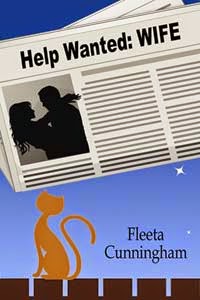 HELP WANTED: WIFE blurb:
Rancher Cole Witherspoon, a practical man, decides his ranch needs a woman's touch and he needs a wife; he goes about filling the vacancy in a practical way. He places a help-wanted ad. He doesn't suspect when Cherilyn bixby answers the ad how many lessons in love he'll be learning from the no-nonsense schoolteacher . . . and her big, red cat.

And, coming this fall -- 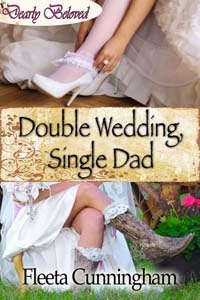 Lucinda Parks has a little problem. She's coordinating a double wedding for sisters--one is an American Princess and the other is a Texas Rodeo Queen. Lucinda might manage their contradictory dreams if she could keep her mind on the wedding and off the father of the brides.

A fifth generation Texan, Fleeta Cunningham has lived in a number of small Texas towns. Drawing on all of them, she created Santa Rita and its inhabitants. After a career as a law librarian for a major Texas law firm, writing a monthly column for a professional newsletter and other legal publications, she returned to her home in Central Texas to write full time. Fleeta has been writing in one form or another since the age of eight. When she isn't writing, Fleeta teaches creative writing classes, is a frequent guest speaker for civic and professional organizations, and keeps house for her feline roommates. Her other musings can be found at www.authorsbymoonlight.com or her website www.fleetacunningham.com. She loves to hear from readers.

The Santa Rita Series includes DON'T CALL ME DARLIN', BLACK RAIN RISING, ELOPEMENT FOR ONE, HALF PAST MOURNING, and CRY AGAINST THE WIND. The first book in her new series Confronting Destiny, BAL MASQUE, was released earlier this year. She also has short stories, "Close Encounter With A Crumpet" and "Help Wanted: Wife" available, and a novella, DOUBLE WEDDING, SINGLE DAD, which will be released in the fall.
Posted by Caroline Clemmons at 1:30 AM