The Problem with Intentional Series by Paty Jager

When I wrote my first published historical western romance, Marshal in Petticoats, I didn’t write it with the intention of writing four more, and eventually three more, books about the Halsey family. Back in those days, all I knew about a story when I started writing it was the hero, heroine, where the book was located, and that I needed to have a climactic ending. I didn’t even know Gil had four brothers when I started the book. I just knew he was hiding from his past. When his past smacked me upside of the head and I discovered he had four brothers and then they each one came on the scene, I played with the idea of them each having a book, but still didn’t think too much about it. Then Marshal in Petticoats was picked up by a publisher and readers started asking for another Halsey Brother book. I decided which brother would have the next book as I finished one and came up with a (for the time period) manly occupation to give each of the heroines. And that was as far ahead as I thought about the series.

Now, when readers wanted more of the Halseys, I came up with the idea I could write a book about each of the young men who became a part of the Halsey family’s life. I thought about the three young men and having left an opening in the last “Petticoat” book, Logger in Petticoats, to have Jeremy, from Marshal in Petticoats, in Alaska that book idea started taking root. I made him coming home and decided to title the trilogy, Halsey Homecoming, to one: show it was part of the Halsey Brother Series, and two: the Homecoming decided the next two books would have to deal with the other two characters coming home or back to the Halsey family in some way.

Wow, that was more than I’d thought about a series before.

Because, in this day and age, people want to see what is coming…I came up with titles Laying Claim, Staking Claim, and Claiming a Heart. And we have the cover of the second book even though the story is only in the infant stages. I’m still trying to figure out what to put on the cover of the third book. 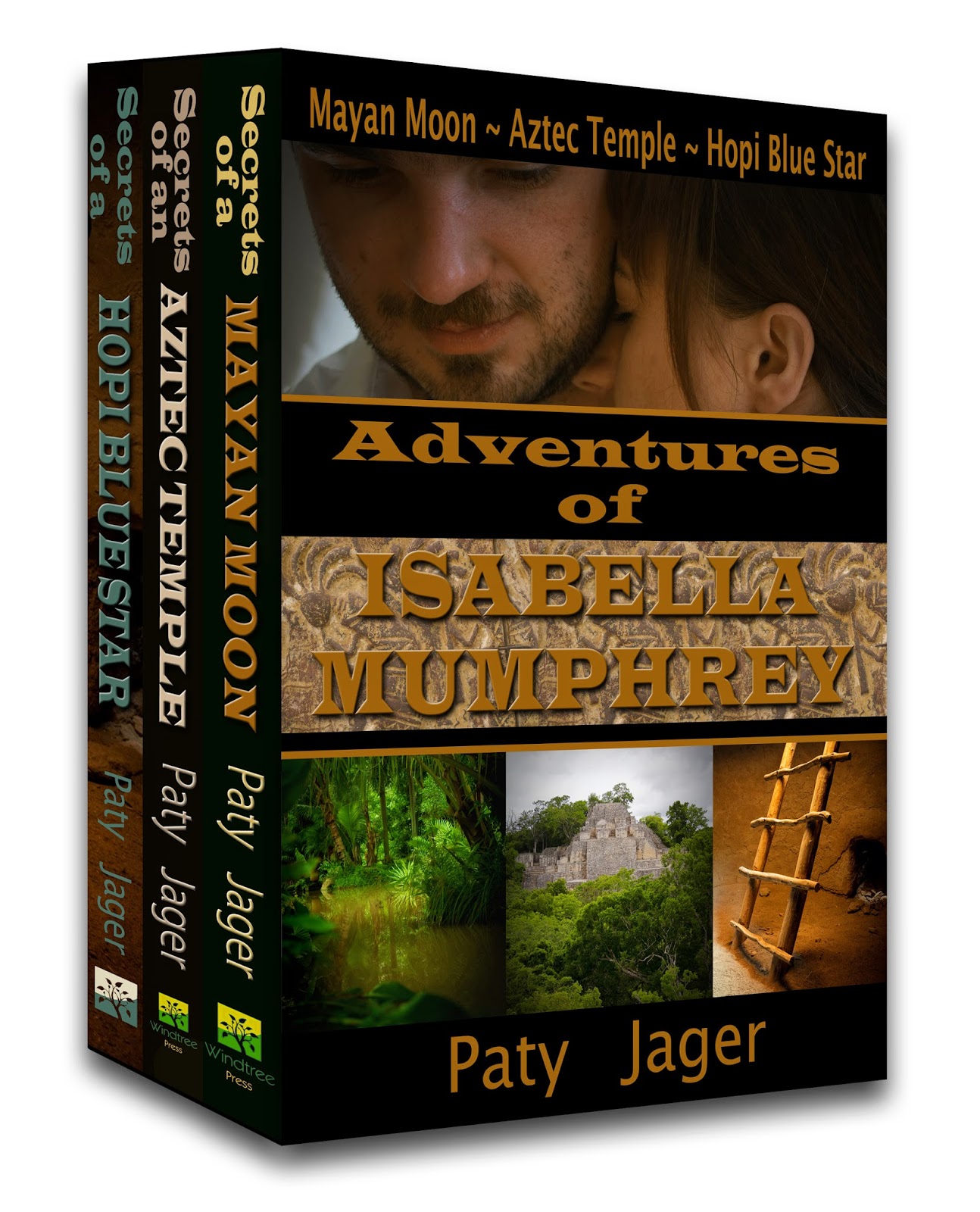 I decided knowing the books in a series ahead of time was a good plan. That brought to fruition the Isabella Mumphrey Action Adventure books. I came up with where I wanted the books set and came up with titles that dealt with Native American people in those areas. Secrets of a Mayan Moon, set in Guatemala; Secrets of an Aztec Temple, set in Mexico City; and now Secrets of a Hopi Blue Star, set in Arizona, starting on the Hopi Reservation and traveling to the southern end of Arizona.

The problem with coming up with titles ahead of time, is I had an idea of what I wanted to put in the book, but then incorporating that as I wrote was more mind-bending than I’d thought it would be.

I’m thinking my original organic growth of a series was easier, but I think being ahead of the game and knowing the series evolution helps to put in snippets that can carry over into the next book. 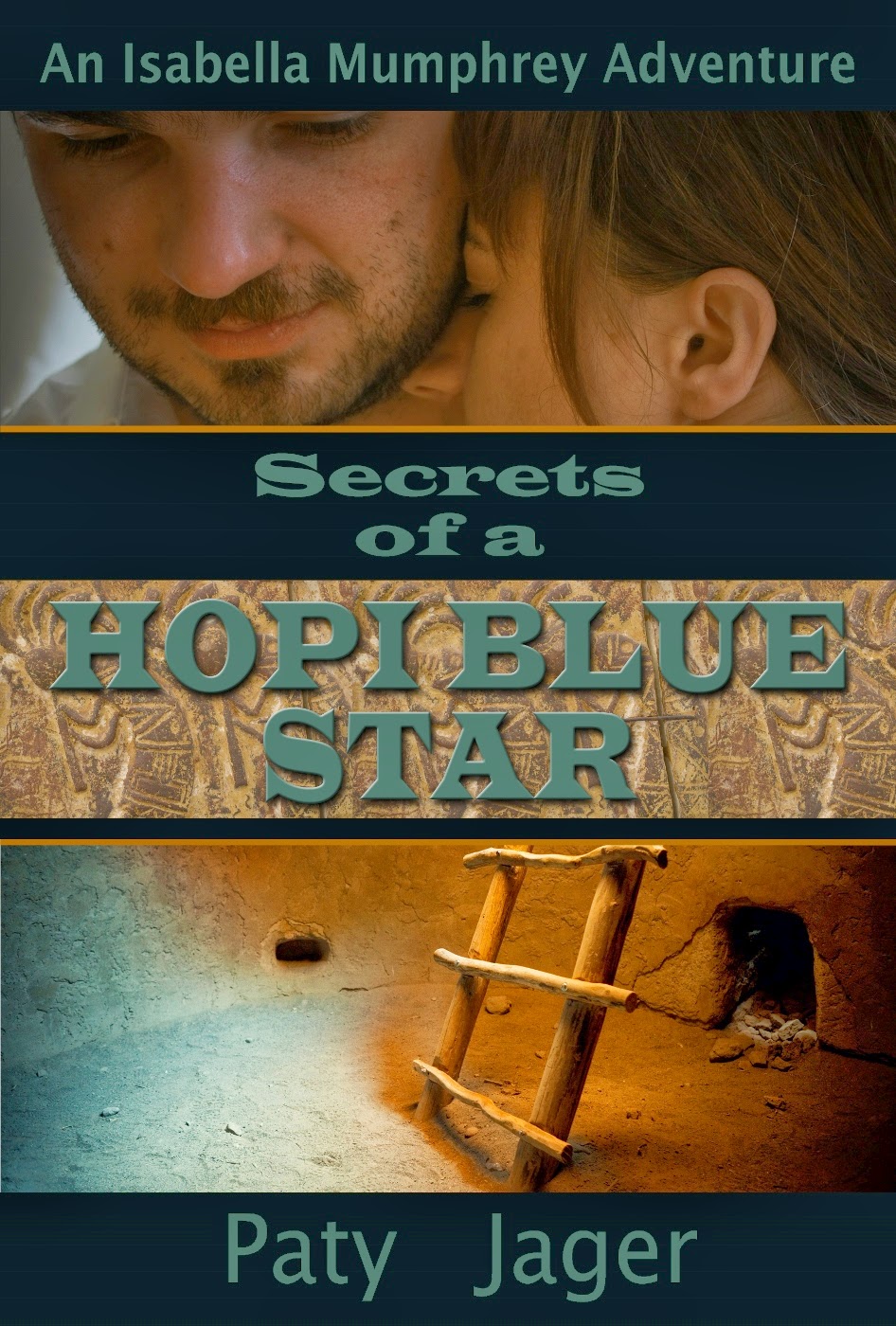 Secrets of a Hopi Blue Star released this week.
Here is the blurb:

Landing in the underground world of human trafficking, anthropologist Isabella Mumphrey learns her own past is as sordid as the predicament she’s uncovered.

No one is who she’d believed them to be—not her parents, her cousin, her aunt. The only constant in her life is her fiancé, Tino Constantine, and now their enemy is using her to lure Tino to his death.


You can learn more about Paty at her blog; www.patyjager.blogspot.com  her website; http://www.patyjager.net or on Facebook; https://www.facebook.com/#!/paty.jager , Goodreads http://www.goodreads.com/author/show/1005334.Paty_Jager  and twitter;  @patyjag.
Posted by Paty Jager at 12:01 AM