In the French countryside where my father was born, the birth place of Merlin, near Broceliande, legends of Melusine the Fae abound. She lived notoriously in Lusignan in the 12th Century, built the tower of Vouvant in one night to save the villagers from the invaders. Wherever you turn, you see the legendary ondine gracing the signs of the local taverns, the bakery, the museum. There, Melusine is alive, and part of history as well as legend. But very few are familiar with the entire scope of her story.

While visiting the Melusine Museum in Vouvant, years ago, I came upon a special exhibit that included a puzzling tapestry. It depicted the wedding of Sigefroi of Luxembourg with Melusine, in 963 AD. 963? The Melusine I had come to know had lived centuries later. How was this possible? Then I discovered many more legends of Melusine, her mother, and her two sisters, in the local folklore of various European localities at different times in history. As if the same family of Fae, immortal by nature, had survived through the centuries, each time with the same personality, each time afflicted by the same curse, for abusing their supernatural powers in childhood...

Excited by that discovery, I set upon a decade of research to connect all the dots. Yes an entire decade. While writing other books, I actively pored over ancient translations, old texts, I traveled to France to tiny libraries and museums holding on to their local legendary roots... until I put together the many pieces of that incredible puzzle, to uncover the entire picture. Only then did I understand what I had... enough fantastic material to write the most exciting medieval fantasy series.

My agent was very excited and prompted me to write the series. But publishers at the time did not receive it well. They thought the readers would not buy medieval fantasy... unless it was vampires. Well, my immortals are not vampires. Finally, a Canadian publisher, Books We Love, gave this series a chance last year, and I am grateful. Four books are out right now, with a fifth to be released around the holidays. More will follow as the tapestry of the entire legend unfolds.

The Curse of the Lost Isle series starts in the early 800s with Pressine the Fae, in PRINCESS OF BRETAGNE, during the Viking invasions in Scotland. In Book 2, PAGAN QUEEN, she defies the Goddess and gives birth to three daughters, Melusine, Meliora, and Palatina.

SEDUCING SIGEFROI, Book 3, and LADY OF LUXEMBOURG, Book 4, are set at the foundation of Luxembourg as a country. CHATELAINE OF FOREZ, Book 5, is set in what is now France, and was just released this year.

There is also a box set of the first three novels in the series… a true bargain. The rest of the series sweeps Spain, Aquitaine, and the Middle East during the Crusades, an exciting and dangerous time to be alive... especially for Pagan immortals. See an overview of the entire series on my website under Medieval Series. 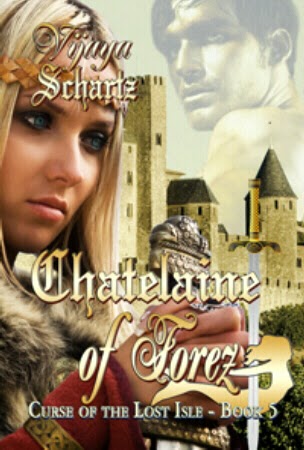 1028 AD - Afflicted by the ondine curse, Melusine seeks the soul of her lost beloved in the young Artaud of Forez, who reigns over the verdant hills south of Burgundy, on the road of pilgrims, troubadours and merchants. But this dark and brooding Pagan lord is not at all what she expected or even hoped. He knows nothing of their past love, her Fae nature, or her secret curse. Must Melusine seduce and betroth this cold stranger to satisfy the Goddess and redeem her curse?


The gold in the rivers instills greed in the powerful, and many envy the rich Lord of Forez, including his most trusted vassals... even the Bishop of Lyon. When Artaud’s attraction to Melusine makes them the target of a holy hunt, will she find redemption from the curse, or will they burn at the stake?

This series already gathered many five-star reviews, with titles like "Edgy Medieval, Yeah!" or "Wow!" or "Fantastic!" But be warned, I do not sugarcoat the middle ages, and some scenes are bloody and realistic. I hope you will try it and enjoy it. At this time this series is only available in kindle on Amazon. Follow the links below to find all my books.

Find Vijaya on her WEBSITE, and her books on AMAZON - B&N - ARE and other major eBook retailers on the web.