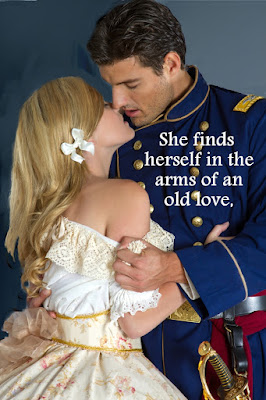 
When he heard it start up, he understood why, Garryowen, the fighting song of many a soldier. Some regarded it as an ending song as well. He swept her into his arms and began the quickstep that was best danced to it. They spun around the dance floor, this time with no chance to talk. He realized as they danced that others had stepped aside. They were in the center of the floor and then they were the only dancers. When the music ended, the others applauded and Belle laughed.


“You look at little stunned, Captain,” she said as they left the floor.
“Custer has claimed that for his Seventh Cavalry.”
“Does that mean no one else may claim it?”
“No, but do you know it’s a drinking song?”
“Actually no... but I did know about Custer. Miles Koegh actually claimed it first.”
“How did you know that?”
She smiled. “Well, don’t tell anyone but I did happen to have met General Custer once.”
“Ah.”
“You know him too, then and it’s why you said ahhh.”
He smiled. “Only on an acquaintance level. He is known as a lady’s man.”
“Really? I thought his wife was delightful.”
“Did you know them through your husband?”
“Please, I’d rather not talk about that.”