Will You Be My Valentine? by Bea Tifton

So, I faced quite a dilemma with my blog topic today. I could ramble like I usually do, or acknowledge that my post fell on a holiday and write a post about Valentine’s Day. Hmmm. On a blog devoted to romance, it’s down to the single girl. I decided to ramble about Valentine’s Day and combine the two options.

First, many people think that Valentine’s Day is just a random day created to generate income for a major card manufacturer. They ask disgustedly, (and, I should point out, that this is generally people who are trying to get OUT of celebrating V Day), “Was there even a St. Valentine?” Well, yup and nope. There was, but then again, some historians think the idea was the combination of three people. One of the most common stories is that when that great romantic Claudius II ruled, he decided that men who weren’t allowed to fall in love and get married made better soldiers. Despite the law that soldiers couldn’t marry, St. Valentine secretly performed marriages for love-struck couples. He was imprisoned, during which time he fell in love with the jailer’s daughter and regularly corresponded with her, signing his amorous letters, “From your Valentine.” Thaaaattt’ssss right. See what he did there?

Written valentines began appearing in the 1400s, and by the 1700s, people were exchanging hand written cards. In the 1900s, with the advent of printing technologies, factory produced valentines were more the norm. “In the 1840s, Esther A. Howland began selling the first mass-produced valentines in America. Howland, known as the “Mother of the Valentine,” made elaborate creations with real lace, ribbons and colorful pictures known as ‘scrap.’” (https://www.history.com/topics/valentines-day/history-of-valentines-day-2)  Now, each year, millions of people send valentines through the mail or electronically.

I’m single and I have a case of the flu, so I’m definitely giving V Day a miss. Does that bother me? Well, no. I love being single. I’ve always been one of those women who just plugged along without a significant other unless I met someone amazing enough for whom to rearrange my life, which I have at different points in my past. Otherwise, I’m a very independent person, even somewhat of a loner (aren’t many writers?), so I’m happy. I have great friends, I’m close to my parents, and I do meaningful volunteer work and write for a living. I’m not 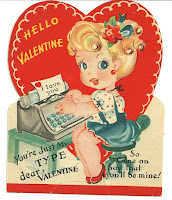 anti-marriage, but I’ve long been comfortable with the fact that I’m single. I heard Emma Watson say she was, “Self-partnered,” explaining that she loved being so. I giggled to myself. I love Emma Watson’s acting work, but the fact that she had to come up with another word did, to me, seem that being single wasn’t yet quite okay. Getting older has made me so much more comfortable in my own skin. I’m (mumbles unintelligibly) years old, I live alone, and I have too many rescue pets, but I don’t dress them up in their own little outfits or barricade myself in a house with teetering stacks of newspapers and empty pizza boxes, so I’m okay every day, including on Valentine’s Day.

Besides, everyone knows the real day of celebration is the day AFTER Valentine’s Day, when all the chocolate is 50% off.

I hope that everyone who wants to celebrate does so, that you have an enjoyable day however you love spending your time, that you get good stuff and realize people are showing they love you (or that you are showing yourself that you do), and that you dress your pets in their own little tutus if it makes you happy.  No judgement here, dear Reader. What are your plans?