Music, parades, glitter covered masks, food, beads, and festive garbs of purples, greens, and golds—it Mardi Gras on Tuesday, February 25th.  It’s the day before Ash Wednesday and marks the final feasting before the Christian tradition of Lent, beginning the next day and called Ash Wednesday.

Mardi Gras is a French term, which literally translates into “Fat Tuesday.” It is also known as Shrove Tuesday which is derived from the word shrive, meaning "to administer the sacrament of confession to and to absolve”.  Cities around our nation and the world celebrate Mardi Gras each year with festivals and parades. And the star of the event is the fatty and rich foods, not the beads. To celebrate, people eat pancakes, cakes, and stuffed donuts, along with crawfish, chowder, and shrimp and corn boils if you are in the South.
The most famous Mardi Gras celebration occurs in New Orleans and the Rio Carnival in Rio de Janeiro, Brazil, where thousands of people descend on the cities to eat, drink, and partake of the revelries.  In New Orleans, the majority of Mardi Gras celebrations are held in the two weeks leading up to Fat Tuesday itself. There are around 80 parades scheduled in New Orleans for the Mardi Gras festival this year.

The celebration of Mardi Gras also involves the use of masks and costumes by participants. In New Orleans, the costumes reflect the shape of clowns, fairies, animals, people from myths, or various Medieval costumes. Many of the costumes are also created with colored feathers and capes.

In the last decades of the 20th century, the rise in producing commercial videotapes, catering to voyeurs, helped encourage a tradition of women baring their breasts in exchange for beads and trinkets. This particular celebration is not one you’d take your children to.

However, in New Smyrna Beach, Florida, where my husband and I spend some of our winter months, a Mardi Gras parade is held each year for adults and families. Participants, aware that children are present, toss candy, trinkets, and strings of beads into the crowds instead.

Do you celebrate Mardi Gras? If so, jot down a few things you and your family do on Fat Tuesday—including those tasty Fat Tuesday treats.

Before I forget, "Four White Roses" is on sale for only $0.99  until the end of the month for Kindle/eBook!  It was a finalist in the American Fiction Awards, Book Excellence Awards, and the Georgia Romance Writers' Maggie Awards. 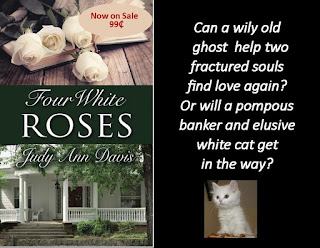